Film: Stranger by the Lake

He pulls into the makeshift parking lot and takes his towel with him. Heâs probably going to catch some rays in the buff, maybe swim in those serene, beckoning waters. Thatâs all well and good, as far as whiling away a lazy summer afternoon goes, but Franck â young, skinny, cute in a barista-next-door kind of way â knows whatâs really bringing him to the secluded lakeside spot in south-central France. Over there, in the bushes, men from all walks of life get together, and if theyâre lucky, get lucky. 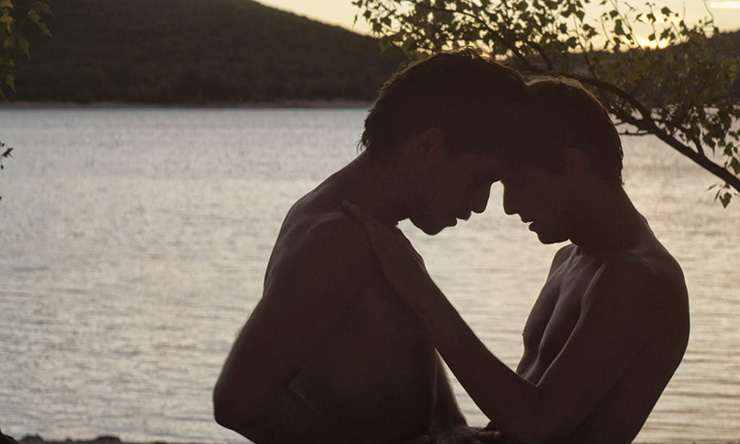 Men who take charge. Men who let themselves be dominated. Men who just like to watch. Men who shake your hand right after theyâre done giving you oral pleasure. Voyeurs. Exhibitionists. Closet cases. Henpecked househusbands with a wandering eye. And easygoing guys like Franck (played by Jamie Bell look-alike Pierre Deladonchamps), who want to get off just like everyone else, but at the end of the day would really like to meet someone whoâll wake up next to him in the morning. Preferably after a night of nonstop sex.

Welcome to the hermetic, ritualistic world of Alain Guiraudieâs Stranger by the Lake, a slow-burn procedural awash in ambience and speckled with explicit homoerotic imagery meant, not just to titillate, but to arrive at a deeper understanding of a particular worldview. Guiraudie navigates this territory with an anthropologistâs curiosity, his static camera zeroing in on the rampant decadence, reckless behavior that could put reputations on the line and qualities of life in jeopardy, all to experience the thrill of the hunt, the release of carnal ecstasy.

What these Gallic horndogs donât know is that thereâs a predator in their midst. Our first glimpse of Michel â quiet, handsome, enigmatic â shows the titular stranger slicing through the lakeâs surface with an effortless sense of purpose, a lone wolf luxuriating in his independence â¦ and looking for his next conquest. Michel (Christophe Paou), an alpha male sporting a retro pornstache, is letting Pascal (FranÃ§ois Labarthe), his current boy toy, service him out in the woods when he exchanges glances with Franck, who is instantly smitten. Michelâs bedroom eyes size up his prey. He likes what he sees.

But what about Henri (Patrick DâAssumÃ§ao), the schlubby, middle-aged loner who sits by himself near the waterâs edge? His banal ordinariness draws Franckâs attention. They make small talk. Henriâs a logger in between gigs. Franck had a job at a local market, but was let go. Henriâs girlfriend gave him the heave-ho. The older man is curious about Franckâs infatuation. âThe guys I like are always taken,â Franck tells him. Something about Michel rubs Henri the wrong way. Guiraudie spends a lot of time on this budding platonic friendship, and these scenes, which take place quite literally away from the frisky shenanigans in the bushes, might initially come across as superfluous, but as Stranger by the Lake progresses, it becomes clear they underscore the themes Guiraudie is keen on exploring. What truly fascinates the writer-director isnât so much the sex, but the impulses that lead men like Franck to throw common sense out the window.

Franck continues to stalk Michel from a distance, until late one afternoon, when heâs peeking in on Michel and Pascal â bitchy, territorial, ill-humored â as they swim alone in the lake. Oh, look, heâs playfully dunking Pascal under the water. Hmm. Why wonât Michel let Pascal come up for air? Guiraudie allows the scene to unfold in extreme long shot, organically generating the dread evidenced on Franckâs face as he realizes what is taking place before his eyes. The chilling sequence brings to mind a scene in Leave Her to Heaven, a 1945 film noir shot in lush Technicolor, in which a femme fatale played by Gene Tierney watches as her husbandâs disabled younger brother struggles to remain afloat, and does nothing. Petrified by what heâs just witnessed, Franck waits until after Michel leaves to make his discreet getaway. And then Franck keeps his mouth shut as he makes his move, and becomes ensnared in this well-endowed black widowâs web.

A more conventional filmmaker might have started to turn the screws on his audience as Franck becomes physically involved with, then emotionally attached to this seductive sociopath. Guiraudie, to his credit, is after something loftier than merely delivering genre-derived pleasures. He approaches the pulpy subject matter with a rigor that eschews a traditional payoff, often entrusting the foreboding widescreen imagery to do the heavy lifting. The meticulously composed landscapes are inextricably linked to these charactersâ inner lives.

A by-the-book police inspector (JÃ©rÃ´me Chappatte) soon invades this besmirched Eden, pestering the regulars with all kinds of nosy questions. He intuits Franck knows more than heâs letting on, and continues to hound the lovelorn garÃ§on whoâs increasingly disheartened by Michelâs refusal to be with him outside the cruising spot. Guiraudie is equally strict with the viewer. Stranger by the Lake unfolds entirely in this deceptively peaceful locale. The determined law enforcer berates Franck and âhis kindâ for continuing to engage in illicit sexual encounters where a murder has occurred. âWe canât stop living,â a defiant Franck retorts. Instead of using the policemanâs patronizing remarks to pass judgment on what he regards as Franckâs failure to do the right thing, Guiraudie uses the inspector to convey how heterocentric disapproval continues to engender resentment, particularly among those who, despite their transgressive conduct, ultimately yearn for normalcy.

Guiraudieâs disciplined m.o. requires patience, and it leads to an ending that might frustrate viewers hoping for a more concrete narrative resolution to Franckâs moral dilemma. The final scene, set as night engulfs its characters, takes a personâs quest to find a lasting connection to its logical extreme. It strikes a bleak, unsettling note that lingers uneasily, like a nightmare that seeps into your waking hours. Itâs a fittingly open-ended conclusion to this transfixing journey into darkness.

Stranger by the Lake is showing at the Miami Beach Cinematheque (mbcinema.com) through Feb. 19. It contains scenes of graphic gay sex and existential brooding.