Noir Melodrama Depends Too Much On Bold Visuals

Her emerald-tinted eyes seduce with the promise of untamed passion. Slim and supple, Ava slinks into the frame like an otherworldly apparition, her phony vulnerability cloaking ulterior motives the way her indigo trench coat conceals those curves that drive gullible men to murder and suicide. (A lonesome saxophone is playing inside your head right about now, isnât it?) 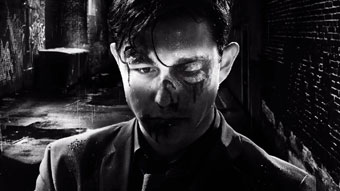 The titular femme fatale in Sin City: A Dame to Kill For, played by a razor-sharp Eva Green, represents everything directors Robert Rodriguez and Frank Miller render in nearly pitch perfect fashion about that most pessimistic of movie genres, film noir. Like its 2005 predecessor, this sequel adapts Millerâs hard boiled graphic novels, originally published in serialized form by Dark Horse Comics, for the screen, and it retains the source materialâs fluidly paneled, mostly monochromatic aesthetic while adding 3-D into the mix. What the filmmakers donât quite pull off this time is providing the past-its-prime subject matter with a narrative backbone, expecting the bold visuals to do the heavy lifting. Itâs a testament to their commitment to this pop-culture-reference-plagued universe that, at least until it runs out of juice, the second Sin City delivers lurid genre pleasures with gleeful abandon.

Rodriguez and Millerâs investment to their Darwinian landscape extends to the ensemble cast, which features some A-listers one is more accustomed to seeing in more mainstream projects. Weâll get back to the sultry Green in a bit. The Dame portion of A Dame to Kill For plays in tandem with a handful of smaller stories circling the central tale like doom-laden satellites, two of which Miller penned specially for this film. Following a negligible intro featuring tough guy Marv (Mickey Rourke) that mostly serves to indulge in cominâ-at-ya 3-D flourishes, the film settles on one of the original stories, which involves Johnny, a cocky card shark played by a shrewdly cast Joseph Gordon-Levitt, engaging in a poker standoff against the corrupt, cold-blooded Senator Roark (Powers Booth, the embodiment of bureaucratic decay). 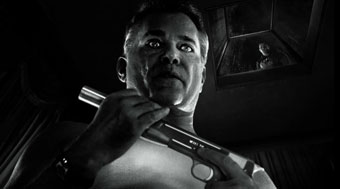 Victory at cards spells defeat for Johnny outside the smoke-filled parlor, and if the ensuing violence is tad too stylized to deliver the desired punch to the gut the material practically begs for, itâs delivered with enough high-contrast panache to keep the eyeballs satiated. (Speaking of eyeballs, thereâs some choice gory bits that bring Kill Bill, Vol. I to mind.) Dameâs never more assured than when it follows Dwight McCarthy (a spot-on Josh Brolin, taking over Clive Owen), a heartsick shutterbug adept at catching adulterous brutes with their pants down, as he becomes ensnared on Avaâs web of deceit and betrayal. Ava and Dwight, you see, have a history, but now that sheâs become milquetoast billionaire Damien Lordâs (Marton Csokas) trophy wife, sheâs ostensibly the no-touchy forbidden fruit. Seemingly out of the blue, Ava comes to Dwight, asking for forgiveness and wailing about her travails as a battered housewife, forever shadowed by her husbandâs lethal bodyguard Manute (Dennis Haysbert, skirting a little too close to racial stereotype for comfort).

The fists fly fast and furious, and the heart wants what it wants in all kinds of trite yet compelling ways. Rodriguez (From Dusk Till Dawn, Once Upon a Time in Mexico) has never been the most mature filmmaker, but his enthusiasm is infectious, never more so than when Brolin and (mostly) Green shed their clothes along with their inhibitions. I did wish, though, that Rodriguez and Millerâs had given Gail (Rosario Dawson), the badass madam who helps Dwight in his hour of need, more to do. The same goes for Mort (Christopher Meloni), a straight-arrow police detective who doesnât try hard enough to resist Avaâs advances. 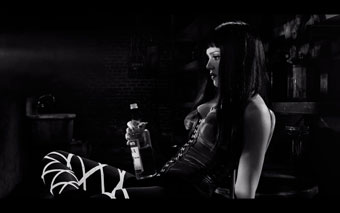 Thankfully, the Dame to Kill For segment unfolds with hardly any interruptions from the other storylines, a wise move that keeps the best part of the film flowing with few distractions. Alas, once Ava and Dwightâs fates are revealed, itâs time to check in on the other characters, and thereâs nowhere for this Sin City to go but downhill. Gordon-Levittâs story thread has an agreeably downbeat finish, but then itâs up to exotic dancer Nancy Callahan (Jessica Alba) to wrap things up with a revenge story pitting her a seemingly unbeatable Roark. Nancy has become too fond of the bottle, a development the Into the Blue actress is unable to convey convincingly, and it makes her scenes inside the seedy bar where she performs more of a chore to sit through than they ought to be. The warmed-over yarn, besieged by cut-rate telenovela tactics, is somewhat enlivened by Marv and the deceased John Hartigan (Bruce Willis). Yes, the latter, a police officer who rescued Nancy as a young girl, blew his brains out at the end of the first Sin City, but here he is, a ghostly companion in what amounts to a baldly obvious reference to The Sixth Sense.

Sin City: A Dame to Kill For peters out when it should be building to a satisfying finale, but that doesnât make the elements that do work any less enjoyable. Right on cue, the fanboys who heaped unwarranted praise on Marvelâs way-too-eager-to-please Guardians of the Galaxy couldnât wait to voice their dismay and disappointment with Rodriguez and Millerâs return to Basin City. From where I was sitting, though, this marks something approximating a return to form for Rodriguez, who crapped out last year with the inferior Machete Kills. As unabashed comic book-based hijinks go, Iâll take Millerâs gallery of R-rated malcontents over Marvelâs intergalactic, perpetually bickering motley crew any day of the week. This latest onscreen venture is imperfect, but it still put a goofy grin on this grumpy criticâs face. And by the time the last shot is fired, isnât that what these late-summer movies ought to do?