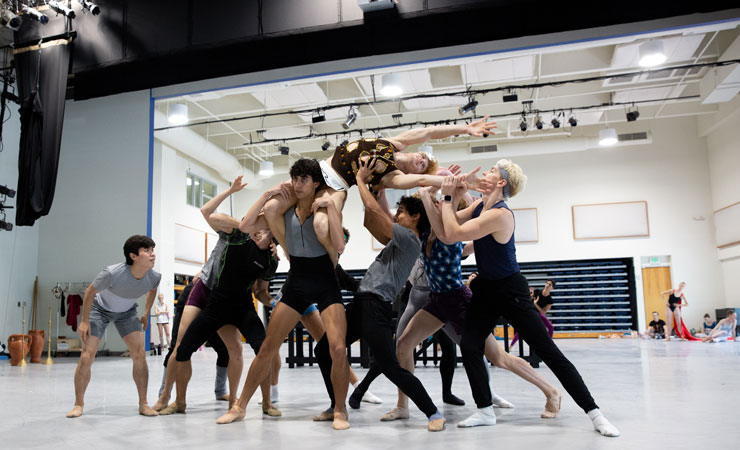 On a recent visit to Miami City Ballet (MCB) rehearsal studios, choreographer Claudia Schreier was intently creating the last movement of her new piece, âThe Sourceâ having its world premiere as part of MCBâs final program of the season, âProdigal Son.â The mixed rep bill opens in Miami at the Arsht Center on Friday, May 6, Saturday, May 7 and Sunday, May 8, and culminates in Fort Lauderdale at Broward Center starting on May 21.

In the rehearsal, Schreier was working on a lift that placed the ladies on the mens' shoulders.

âIt should be like flying,â Schreier said as she opened her arms and reached back. It was clear to see the effect that she wanted, and the couples were trying various ways to bring "flying" to fruition.

It was just Day 2 of the rehearsal period.

While the dancers have been rehearsing off and on since the fall, the allotted time in April will be the final stretch that leads up to opening night. Schreier easily demonstrates each move, and then refers back to her computer for musical cues and choreographic notes. While time is of the essence, she wants to be thorough.

Schreier was appointed resident choreographer of Atlanta Ballet in early 2020, having already received numerous awards and accolades for her work. She is a woman of color, a ballet-based choreographer, and a creatorÂ â a role that can carry a lot of pressure in todayâs dance profession. Schreier says it is very positive pressure. She hopes to use the platform that she has been given to advocate for those who may not have had the opportunities that she has hadÂ â opportunities to grow, to build and to choreograph.

âI think there is a spotlight on female choreographers right now, which is wonderful,â she says. âBut that does come with a lot of expectations. I feel very lucky that I didnât experience that. I think most of my pressure has been self-inflicted," she says with a laugh.

MCB artistic director, Lourdes Lopez, has been coordinating with Schreier "as far back as 2016," Schreier says.

âShe wanted me to make a work for the company and she officially commissioned me for a 2020 program which, of course, didnât happen," she says, referring to the pandemic.

In the interim quarantine period, Schreier created the 2020 piece, âPlaces,â a MCB commission made for the virtual stage, filmed by Alexander Iziliaev with original composition for string quintet and piano by acclaimed Miami-based composer, Jorge Mejia. This was a first opportunity for Schreier to connect with MCB dancers. 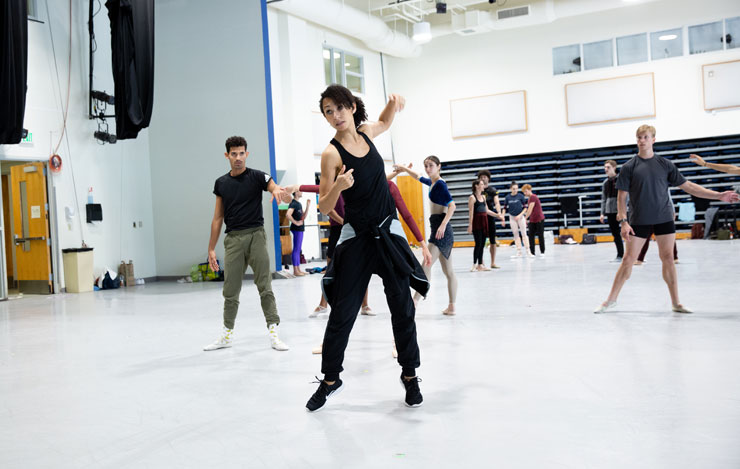 Miami City Ballet choreographer Claudia Schreier was intently creating the last movement of her new piece, "The Source" with dancers (Photo by Iziliaev)

Now, she and husband, collaborator and filmmaker, Adam Barish, have been working since spring of 2021 to create âThe Sourceâ with subtle projections by Alex Basco Koch, scenic design by Jason Ardizzone-West, costume design by Abigail Polston, and lighting by Mark Stanley. Itâs a large endeavor.

MCB principal dancer, Nathalia Arja is dancing in her second project with Schreier having been one of the six dancers in âPlaces.â

Schreier hopes that the choreography is evolving with the dancers.

âI think with every project, I learn a little something new. I learn more about my comfort level with exploring new ways of creating. Each project really affects the next,â Schreier says.

As a choreographer, Shreier has a clear vision of what she wants to create within the structure and patterns, especially with the detailed music. For individual movement, however, she leaves a lot of room for flexibility.

âI want the dancers to find how best they can maximize their own potential,â Schreier says. âIf I assign something rather than allow them to find what works for their body, I feel like Iâm not doing my job properly.â

Arja says that Schreier describes the feeling of the movement very clearly, and that, for a dancer, it makes sense.

âThe Sourceâ was initiated as a project that was twofold: to create a live performance of dance that would be choreographed by Schreier, and also to create a film of the dance that could tell the same story, generate the same feelings, intimacy and emotions and could be available at any given time or place. The film would be created simultaneously by Barish. This dual initiative has impacted every decision made since the piece began.

âClaudia almost always starts with music,â Barish says. âBut for this project, we had to start somewhat conceptually. I think the story and the music evolved together.â

They chose five very specific pieces of music for five particular movements. While each piece of music is very different, the duo was very aware of keeping a sense of flow, of continuity, and "a clean melodic thru-line." Each piece of music compliments the next. Included is a piece from American composer, guitarist and satirist of the 1960s through the 80s, Frank Zappa.

âIt is one of his symphonic works. Not what you would typically expect from Frank Zappa,â Schreier says.

âThe Sourceâ also includes a musical section by composer Julius Eastman, known for his minimalism. Set in a 13-beat structure, with musical "pillars" that must be adhered to, Schreier says there is a lot of freedom and improvisation within the set structure.

âI think this makes it fresh every time,â she says.

Schreier also gives an enormous amount of credit to MCB musical director and primary conductor, Gary Sheldon, who crafted and customized the musical suite based on Eastmanâs score.

Barish says, âThe entire musical piece was over 70 minutes long. Gary found the shape of the music and continued to maintain that shape in a more condensed fashion. So it really maintains the integrity of what Eastmanâs original vision was for the piece.â 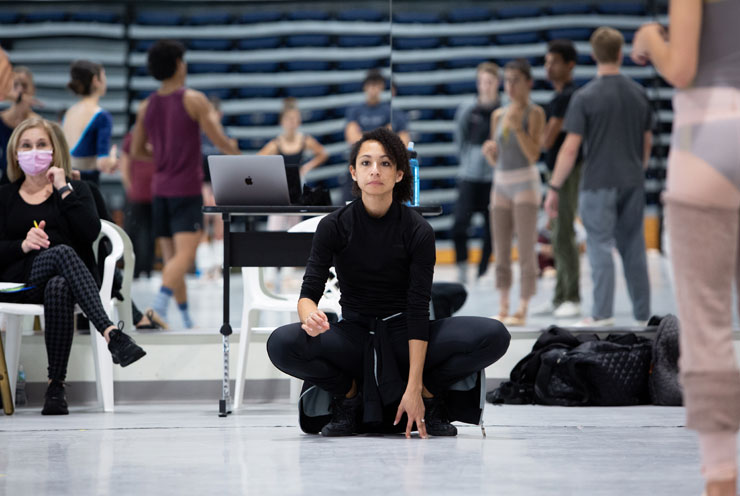 According to Barish, the story ofÂ  âThe Sourceâ centers around a group of people who are experiencing some type of grief. Theyâre inspired to take on an adventure of some sort to see if it is possible to overcome their grief.

Schreier and Barish have crafted a tale where people enter an "alternate world" to destroy the roots of the pain. The duo hopes that with this piece, they not only speak to the poetry of dance in general, but they are responding to some of the 21st-century questions about life and emotion.

Matilda Solis is a new member of MCB. She is says she is excited to be working with the company dancers and to be in the creative process for a new ballet at its inception. As a dancer, she concurs thatÂ  âThe Sourceâ is about a group of people not wanting to see change, and being gently "pushed" by another group into positive acceptance.

âI think we can all connect to the idea of loneliness and not wanting to accept change,â Solis says. âTowards the end, there is acceptance, a release, letting go of fears, accepting change, accepting love.â

While hardships and challenges have been experienced during the pandemic, Schreier and Barish do not feel âThe Sourceâ is a pandemic piece.

âGrief is a timeless and universal feeling,â Schreier says. âThe work is a truly human experience and is relatable. It is a story of hopeÂ â a journey to hope and connection.â 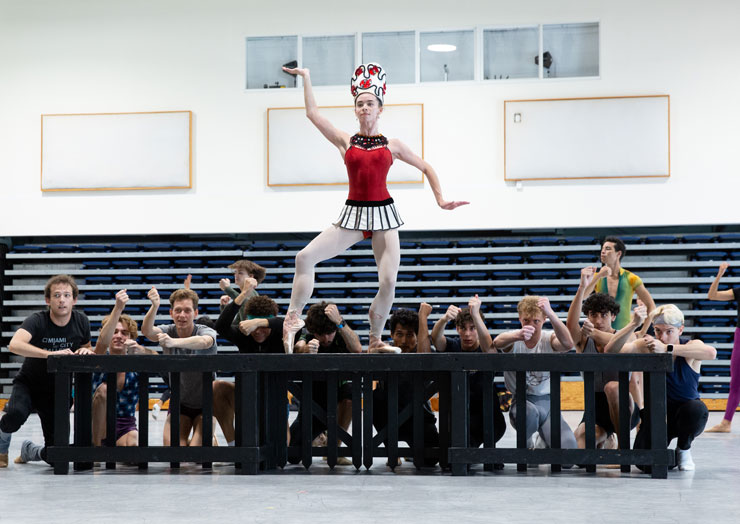 The ballet that carries the program's title, âProdigal Sonâ is a timeless masterpiece depicting the classic tale of sin and redemption. Created by George Balanchine for the Diaghilev Ballet Russes and premiering in 1929, with music by Serge Prokofiev, âProdigalâ is performed by companies throughout the world.

Premiered by New York City Ballet in 1950, the title role of the Son was performed by Jerome Robbins who was choreographer and later named ballet master for NYCB. The role was later reprised by Edward Villella who worked intimately with Balanchine. It is a coveted role for male dancers.

The two featured characters in this tale are the rebellious Prodigal Son and the elegantly beautiful and treacherous seductress, the Siren whose followers rob the Son. Remorseful and beaten, the Son drags himself back home to a loving and forgiving father.

Alexander Peters is cast in the role of the Prodigal Son. He danced the role seven years ago as staged by former NYCB artist, Richard Tanner, and has now been working with NYCB veteran Colleen Neary, who staged "Prodigal" for MCB. 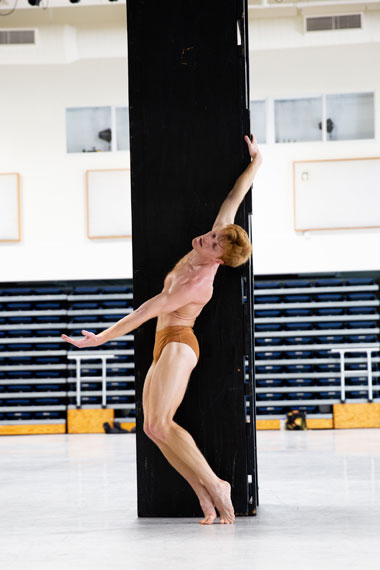 âThis is sort of a monumental role for a dancer,â Peters says. âWhen I first danced âProdigal,â I was eager and excited, but maybe a bit overwhelmed. To share all the complexities and emotions with the audience in a little over 30 minutes is very complicated. I think the biggest change now is me as a person. I can approach it (the role) differently, and strip away some of the unnecessary ingredients. I feel it is more authentic.â

Balanchine does not use a lot of pantomime in âProdigal." The story is told through the steps and it is very physical.

âThere are different motifs that Balanchine gave to the characters, that speak much more than if they were going to spell it out,â Peters says. âMore physical ideas that the Siren and Son use.â

Peterâs Siren will be Adrienne Carter. They have known each other for a long time, which Peters feels helped the initial rehearsals. The partnership and "man-handling" between the Siren and the Son is very intimate, complex and provocative, so familiarity can be an asset.

The ballet, remains as relevant today as it was when it first premiered. It still stirs the same emotions and creates sexual tension.

âThe choreography is brilliant,â Peters says. âI think the audience will feel almost a little bit uncomfortable. We have to dive really deep into the sin part for the redemption to work. The themes are universal. I think thatâs why the work continues to sustain itself.â

Another premier is William Forsytheâs âHerman Schmerman Duet.â Arja is very excited to be dancing the female role in her first and MCBâs first piece by Forsythe, a choreographer and presence who is an icon in the dance community.

Lourdes (Lopez) brought this in for us, and I didnât want to get too excited until I knew it was a reality that I would be learning this piece.â Arja says. âI am so excited.â

The piece is ten minutes of non-stop dance. Itâs sassy, quirky, fun, and Arja says, one of the most "demanding and exhausting pieces" sheâs done.

With both the male and female dancers wearing skirts, there is a jovial competitive edge that allows the dancers to play with the dynamics.

âWe are not supposed to make it funny,â Arja says. âbut it is humorous and the audience, especially here in Miami, might laugh.â

Winding up the program is the company premiere of Christopher Wheeldonâs mesmerizing and tender duet, âAfter the Rain Pas de Deuxâ to familiar music by Arvo PÃ¤rt.

âThis is a total MCB classic program,â says Arja. âWe are so good at doing different styles and I think the audience looks forward to that. I think itâs one of the best programs of the season. You have it all in one night.â