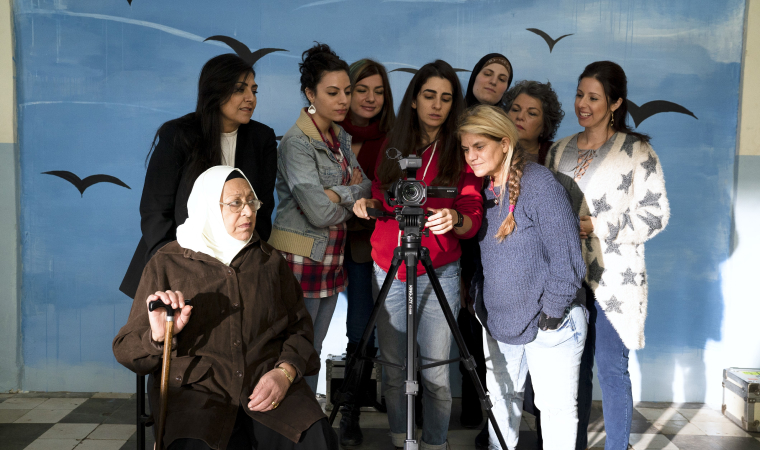 Dana Ivgy (center) and the rest of the cast of "Cinema Sabaya." (Photo courtesy of Memento International)

For many, January usually means a return to normalcy after the hustle and bustle of the holidays, but for South Florida movie buffs, the first month of the year means dashing into a theater multiple times (or, for those still not going to the movies in person, opening your laptop) to see what the Miami Jewish Film Festival has in store this year.

Cue Topol. This is an annual... TRADITION!

It's a tradition that has never led lovers of the moving image astray, regardless of what one may think of the movies being played.

MJFF is billed as âthe largest festival of its kind in the world,â and the 2023 edition, its 26th for those of you keeping track, is comprised of 88 features and 17 shorts representing 25 countries. Nine of the selections are making their world premiere, and 34 of them, or 32% of the program, are directed by women. From now until Jan. 26, there will be 70 in-theater screening across seven venues, and some of the selections will be available to stream for a limited time.

The festival, shepherded with obsessive efficiency by executive director Igor Shteyrenberg, appears to have started with a bang. Thursday night's premiere of the comedy âKaraoke,â starring Sasson Gabay and the prolific Lior Ashkenazi, reportedly drew more than 700 people to the historic Miami Beach Bandshell's open-air amphitheater. Gabay and the film's director, Moshe Rosenthal, were on hand at the premiere, which celebrated and honored Israel's 75th birthday.

Shteyrenberg has kindly extended an invitation to me, miamiartzine.com editor Michelle F. Solomon and film writer Sergio Carmona to once again be a part of MJFF's Critics Jury. Here's a look at four of the six films we will be considering for our award: two acclaimed Israeli features, an animated biopic of sorts and a festival hit set in Ukraine during World War II. 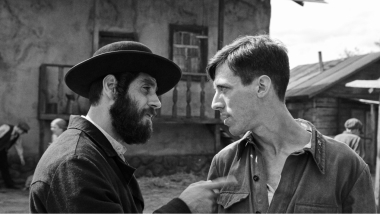 Antoine Millet and Moshe Lobel in a scene from "SHTTL." Photo courtesy of Menemsha Films.

âSHTTLâ: This aggressively prestige portrait of a Ukrainian village near the Polish border on the eve of its extermination by Nazi troops asserts its importance with every extended camera pan and elaborately choreographed scenes. Extended and elaborate because writer-director Ady Walter, making his feature debut, has opted to shoot the film in a way that feels like a single uninterrupted take, similar to Alejandro GonzÃ¡lez IÃ±Ã¡rritu's m.o. in âBirdman.â Lush widescreen black and white images, with brief flashbacks in color interspersed throughout, immerse viewers into this Yiddish-speaking community steeped in tradition, unaware of its impending demise.

The film, which is making its North American premiere at MJFF, is mostly told from the point of view of Mendele (âThe Vigil'sâ Moshe Lobel), a budding filmmaker who's come home to the shtetl to find the young woman who pushed him to follow his dream is about to be wed to the town bully. Heartfelt reunions, hostile taunting and other vignettes of village life ensue. 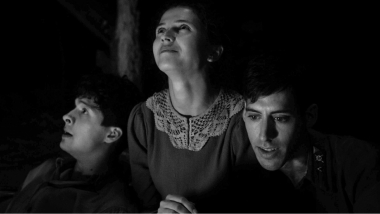 The cast, including Saul Rubinek as a rabbi, is well chosen, even if some of the faces feel a tad too modern. The production design is meticulous but doesn't call attention to itself. (The crew actually built the village from scratch in the middle of the woods about 37 miles from Kyiv.) But âSHTTLâ is also thoroughly full of itself, the urgency of its subject matter undermined by its central gimmick, which, rather than make the film feel more cinematic, accentuates the theatricality of the tableaux brought to life. As the actors recite their lines, they increasingly come across as players in a theme park attraction.

Too much of what Walter wants to accomplish feels like a stunt. You can almost hear the filmmaker say to himself, âI think I can, I think I can, I think I can.â His efforts eventually pay off toward the end, when he deftly juxtaposes the characters' lust for life with the pitilessness of genocide. The decision to stress these people's lives over their deaths was the right call, but âSHTTLâ snaps into focus too late. It topples under the weight of its self-importance. 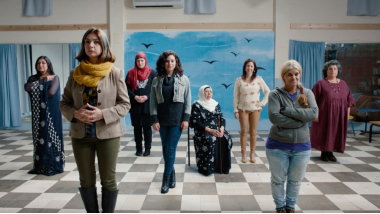 The cast of "Cinema Sabaya." (Photo courtesy of Memento International)

âCinema Sabayaâ: It ought to be fun, a film about a group of Israeli and Arab women from different walks of life brought together to take part in a video production workshop. So how come the results feel like eating your veggies?

Writer-director Orit Fouks Rotem's ensemble drama, also her feature debut, centers around the nine women who enroll in the course taught by a young filmmaker named Rona (Dana Ivgy) in the Hadera Municipality. Once a week, the video-making newbies meet to show their footage, which becomes a gateway to opening up about their own lives. Married and single, devout and secular, young and older, the students bond and lash out, as Rona's projects begin to unearth intimate details that not all of them are comfortable sharing.

It ought to be engaging, but the film's episodic structure, coupled with the topical nature of their conversations during class, prove more grating than enlightening. Some of the scripted but semi-improvised banter occasionally gives the film the spontaneity of a documentary, but Rotem's list of topics she wants to cover disrupts the naturalistic approach, and because the women's stories lack specificity, their problems come across as generic and nondescript.

Family skeletons and deeply guarded secrets begin to surface like clockwork, and the contrivances pile up.

âSabaya,â making its Southeast U.S. premiere at MJFF, is Israel's official entry for this year's International Feature Oscar, and it received Best Film and Best Director laurels at this past September's Ophir Awards, aka the Israeli Academy Awards. It's easy to see why its depiction of differing cultural perspectives united by the pursuit of art has resonated with audiences, but from where this critic is sitting, this plays less like âWomen Talkingâ and more like an episode of âThe View.â Rotem has said her own filmmaking workshops gave her the idea to make this movie, but inspiration is precisely what's in short supply here. Lost in the shuffle is a deeper exploration of the nuts and bolts of audiovisual storytelling and their potential to build bridges and heal wounds. 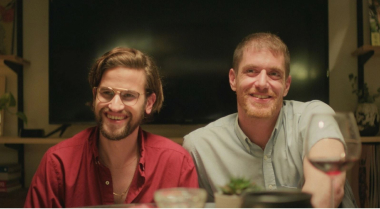 Ariel Wolf and Shlomi Bertonov in a scene from "Concerned Citizen." (Photo courtesy of Greenwich Entertainment)

âConcerned Citizenâ: First-world problems meet multicultural angst in his hot little number set in a south Tel Aviv neighborhood in the early stages of gentrification, beset by tensions between its more affluent residents, the refugees who wander the streets and the police officers who are too quick to use brute force.

At the center of this developing storm are Ben (Shlomi Bertonov) and Raz (Ariel Wolf), a well-off gay couple who are planning to expand their family by having a baby via a surrogate. Raz is gung ho on fatherhood, but Ben, an architect by trade, is more interested in his other baby: a sapling he planted across the street from his apartment. When he witnesses two young men leaning against his tree, he calls the po-po. An act of violence triggered by his call ensues, and his inability to take action begins eating away at him, wreaking havoc on his personal life. 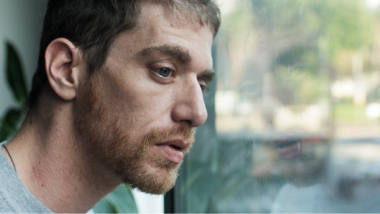 Shlomi Bertonov in a scene from "Concerned Citizen." Photo courtesy of Greenwich Entertainment.

On paper, Ben and his internal turmoil feel like a bougie variation on Paul Schrader's avenging angels, minus the bloodletting, but writer-director Idan Haguel treats the protagonist's morally murky arc like a dark comedy. The filmmaker's tight, whip-smart script pokes fun at Ben and Raz's privilege. (Example: The couple's day starts when their Roomba turns on.) The characters' body language feels lived in, and the dinner parties they throw flow organically, so when Haguel begins turning the screws, it all feels plausible, held aloft by the director's steadfast refusal to let things get too heavy.

What emerges is a gripping character study, anchored by Bertonov's nuanced performance. We know when Ben keeps things to himself, and we know when he's lying about something. In a startling scene, the protagonist spews pent-up resentments about his underprivileged neighbors to Raz and his therapist. His prejudice is showing. âConcerned Citizen'sâ neat trick is that we see Ben at his ugliest, and we still find ourselves rooting for him. 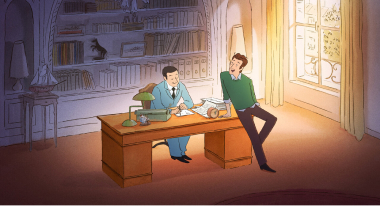 Alain Chabat and Laurent Lafitte (voices) in a scene from "Little Nicholas." (Photo courtesy of Charades)

âLittle Nicholasâ: It might be a fluffy and whimsical animated family movie, but this adaptation of the titular character's adventures, first brought to life in French comic strips and later in illustrated books, isn't always kid stuff.

What sets this bright concoction apart from others of its ilk is directors Amandine Fredon and Benjamin Massoubre's decision to frame their portrait of domestic harmony and wholesome mischief as a work in progress conjured up by âLe Petit Nicolas'â real-life creators: writer RenÃ© Goscinny and illustrator Jean-Jacques SempÃ©. The film begins in 1955, when the two friends and colleagues begin work on the strip. Their creative collaboration is what gives the narrative that extra pep in its step. 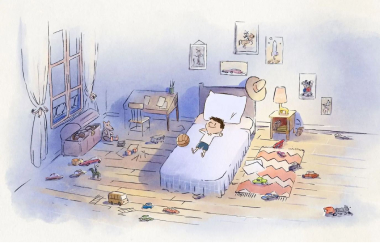 Simon Faliu (voice) in a scene from "Little Nicholas." (Photo courtesy of Charades)

As the film glides back and forth between the Goscinny/SempÃ© brainstorming sessions and a straightforward adaptation of Nicholas' more popular tales, it's clear that the scenes with the authors are considerably more arresting. The Nicholas portions, including his interactions with his parents, grandmother and classmates, are cute and pleasant, but they lack a certain bite that could have really made them pop off the screen. They're undemanding, self-contained stories that bring comfort and contentment, soothing but a tad too tidy.

Ah, but âLittle Nicholasâ is a film that works on one level for children and on another for the young at heart. Goscinny (the voice of Alain Chabat) and SempÃ© (Laurent Lafitte) reveal that the rose-colored nature of their juvenile daydreams conceals dark chapters in their lives: Goscinny and the loss of family members during the Holocaust, and the turbulent home life SempÃ© experienced as a boy.

At its core, the film is a valentine to a friendship cut short by tragedy. Goscinny, who also wrote the âAsterix the Gaulâ comics, passed away in 1977 at age 51. That sense of loss is palpable throughout âLittle Nicholas,â giving it a melancholy streak that makes its moments of unadulterated joy all the more rewarding. Fredon and Massoubre have crafted a touching tribute that feels lighter than air.

For more information about tickets and additional festival selections, go to www.miamijewishfilmfestival.org