A Wonder Of A 'Werther' By Florida Grand Opera 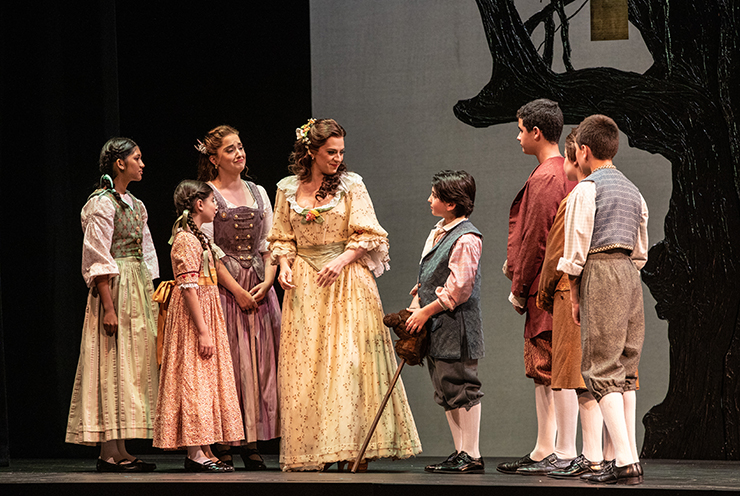 The only thing more tragic than someone experiencing unrequited love, is when that someone is a poet.

Perhaps we all have experienced some level of heartache from a âdoomed love,â and when youâre a novelist writing about it from personal experience, itâs bound to be a best seller. Such was the case with a young German novelist Johann Wolfgang von Goethe, whose popular epistolary novel âThe Sorrows of Young Wertherâ was informed by his own youthful affections for Charlotte Buff.

Goetheâs novel, written during the Sturm und Drang movement in Germany, gave voice to extreme emotions, and that voice was certainly captured well and forever a century later by French composer Jules Massenet in his opera âWerther,â based on Goetheâs novel. Obsession, incomplete love, naÃ¯vetÃ© and all the trimmings that come with idealistic notions are there in Massenetâs characters. Fortunately, most of us do not descend far enough down the rabbit hole to commit suicide, but tragic opera often leans on such misfortune.

And more daunting than an opera about the hyperbolic nature of unreciprocated love, is to get the audience to suspend disbelief and buy it. Florida Grand Opera accomplished just that on Saturday, April 27 at Miamiâs Arsht Center with its new production of Massenetâs tragic opera. When the performers, text, score, orchestra and creative team are all top-shelf and brought together to render a single production, you are going to be included in one magical night of opera. This is what happened on the opening night of FGOâs production of âWerther.â

Starring as the lovesick poet was Greek tenor Dimitri Pittas and opposite him, as Charlotte, was Argentine mezzo-soprano Daniela Mack, a pair of voices that were all at once powerful, nuanced and every shade of color between. 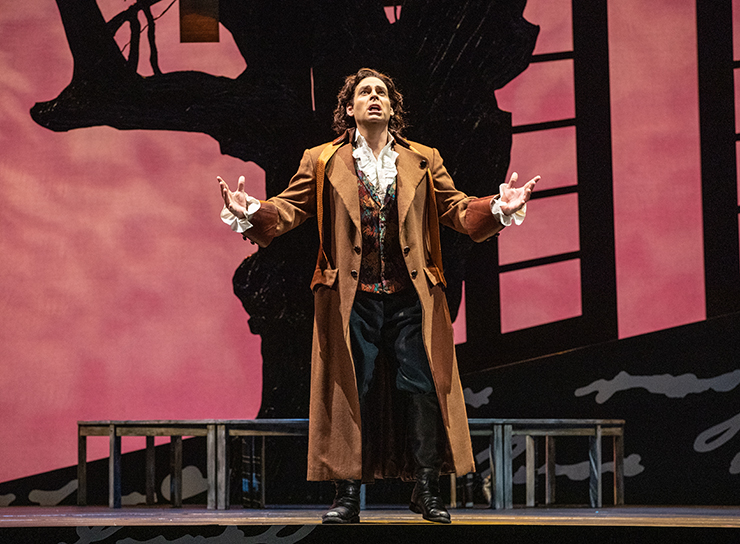 The lens of idealistic affection was realized early, when the orchestra, under the baton of Joseph Mechavich, played the opening series of descending discordant chords, portending the audience's journey with the protagonist through a glass darkly.

Pittas possesses one of those well-rounded tenor voices that immediately displays strength wrapped in a big vibrato, His high notes coming easily to him and his money notes landing sweetly and profoundly in your ear.

With repertoire toward which young opera stars are drawn and aspire to master, Pittas acquitted his numerous arias well. When Werther first arrives to escort Charlotte to the ball ("O nature pleine de grÃ¢ce"), it was abundantly clear that Pittas would command the stage vocally all evening, his big lyrical voice capturing the âmysterious silenceâ and nuanced observations of natureâs âintoxicating perfumes.â He credibly imbued a youthful innocence within his ardor, in both action and voice.

Pittas deepened his resolve, his rich emotion (âJ'aurais sur ma poitrineâ), in sharp contrast to the politeness exhibited between the now married Charlotte and her husband Albert, established the sorrow few of us have felt â â...my entire being weeps...â â the orchestra beautifully underscoring this scene with Massenetâs lush romantic scoring and text.

When Charlotte begs Werther to leave her now and return on Christmas Day, Pittas played his pathos with palpable sincerity (âLorsquel'enfantrevient d'un voyageâ), recovering from a trance-like state with a rich and round sotto voce, his high note passionately searing through the orchestra, as it was rising cinematically. 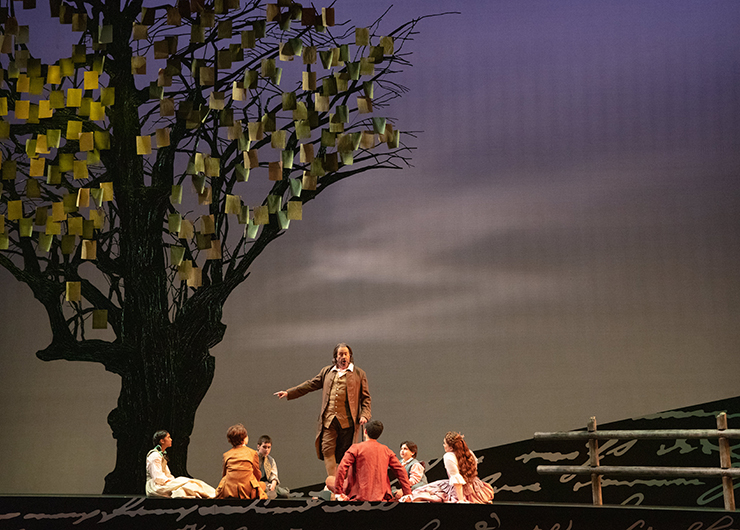 Equaling Pittasâs power and emotion, mezzo-soprano Daniela Mack evidenced vocal chops that were commanding as well as nimble, required for Charlotte, Wertherâs obsession. The 8-minute âLetter Sceneâ (âJe vousÃ©cris de ma petite chamberâ) is a daunting assignment for any diva, requiring tremendous acting ability as well as vocal agility. The attractive Mack essayed the wide range of feeling with honesty as she reread Wertherâs letters, his words stabbing her emotions, intoning âWertherâ to her mounting despair as she recognized that she was still in love with him, her big voice filling this big hall, well worth noting, without amplification.

Massenet made a bold choice when employing an alto sax (an instrument still in its infancy) to underscore Charlotteâs breakdown (âVa! laisse coulermeslarmesâ), which served to be a haunting vibe to her sadness, seemingly as if she was in an evocative dance with the horn. Mack, consistently believable, wrought the lingering melody honestly, then busted the melancholy bubble, asking for pity (âAh! mon courage m'abandonneâ), full-throated above the orchestra.

Pittasâs and Mackâs voices combined heartbreakingly during their tortured dialogue, when she asks him to leave town, and then delicately when he returned on Christmas day, each able to make their quick leaps from dialogue to punch a lyric, their voices rising overpoweringly together as they embraced and shared the inevitable kiss.

The furious intermezzo of shimmering strings and big brass anticipated Wertherâs imminent suicide, a death scene that may hold the record for the longest in all of opera, ending with Werther and Charlotte combining on a soft honeyed note. 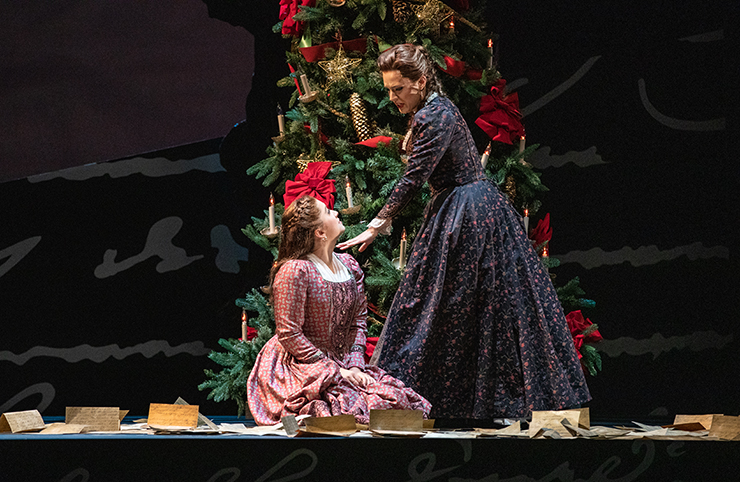 Soprano Evan Kardon portrayed Charlotteâs lighthearted sister Sophie, uncomfortable with any situation that wasnât raining happiness. Whether skipping spritely with a basket of flowers to announce how all the world is joyful with her ("Du gai soleilâ) or trying to console her melancholy sister, Kardonâs flawless and lilting voice and characterization was a perfect fit for the role. She convincingly layered her character with the incapacity for reaching a deeper emotional state.

Baritone Benjamin Dickerson, playing Charlotteâs stuffy soon-to-be husband, rendered âQuelle priere de reconnaissanceâ with the sort of controlled emotional joy over his bride-to-be that one might expect from a fellow barely capable of a deeper emotional state, even after being away for six months. Dickersonâs baritone was pleasantly full, and his conservative demeanor, on point.

Supporting was mezzo-soprano Mariya Kaganskaya as Katchen and baritone Sean Galligan as Bruhlmann, an engaged couple, and the six additional Le Bailli children (coached well by chorus master Katherine Kozak) heard singing at the beginning and ending of the opera, representing joy, innocence and hope, tipping the scales away from a world of dashed dreams. 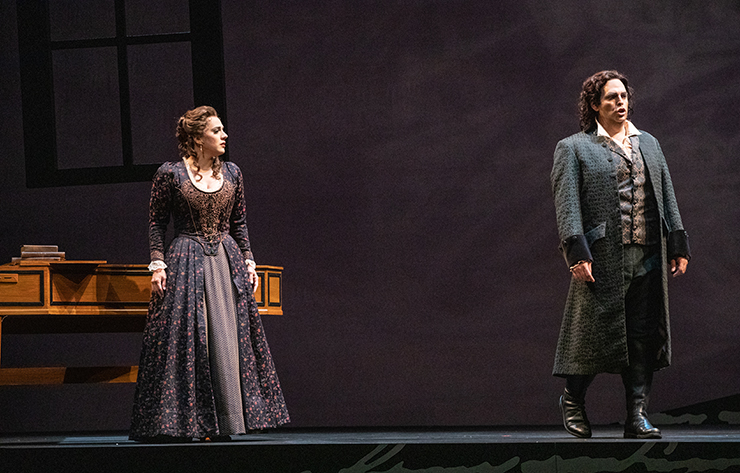 It is a difficult assignment to direct characters who are constantly in a heightened state of emotion. That line between performerâs becoming melodramatic rather than believable can easily get fuzzy. Stage director Lawrence Edelson skillfully kept his players from being overwrought, effectively keeping them honest. The taking of hands, the turning-aways, the conflicted hesitations, rang true. The staging of several couples dancing (including the newly acquainted Werther and Charlotte) was simple, elegant and tasteful.

This opera is about character not spectacle. Feelings were expressed at all times. Tender moments, speaking substance. Edelsonâs direction was measured with lovely pacing, nothing rushed, so the romance could build from innocence to something possibly profound. He drew natural reactions out of his performers, the only way to sell this story as believable with emotions in such a consistently heightened state.

It is refreshing to recognize how Massenet scored the opera as a vehicle for a competent director to nurture honest relationships and feelings unforced by the constraints of time.

Massenetâs skills were such that he wrote music so layered that just the simple taking of someoneâs hands waxed deeply romantic.

Iâm reminded of how easily the French language rolls off the tongue of operatic text. Many of the arias in âWertherâ anticipate the dramatic scoring and buttons of musical theater to be realized within a generation. Massenetâs sumptuous romantic melodies and passages no doubt influenced the forthcoming oeuvres of musical theater composers. And like any great operatic composer, the music becomes a character, perhaps here the musical equivalent of a Greek chorus. 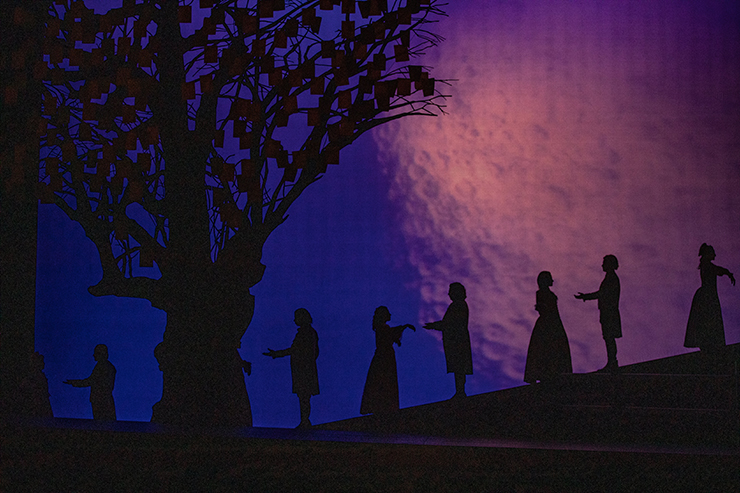 Michael Baumgartenâs sets and lighting boasted an image of manuscript writing projected onto a scrim at top of show, perhaps representing Wertherâs letters, a scrim that later reflected a splash of red light as we hear the pistol shot. We effectively move from gardens, to church, to Charlotteâs home and finally to Wertherâs study.

The costumes from Howard Tsvi Kaplan are representative of 1780s Germany. Men wore shirts covered by long waistcoats, younger men sported tall boots to the knee, women wore dresses ending in a ruffle or lace. The colors tended to pastels - pink for Sophie, yellow for Charlotte.

Remaining schedule | Werther
Sung without amplification in French with projected titles in English and Spanish.