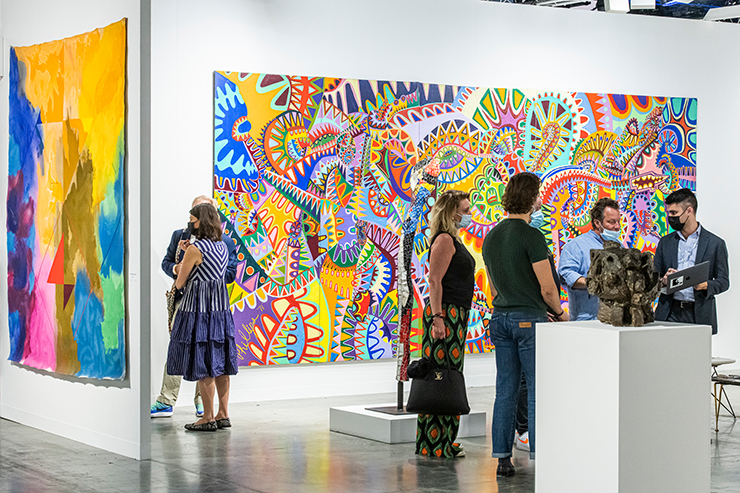 Marking its 20-year anniversary in Miami Beach, Art Basel says this year's event is the largest fair to date with 282 galleries exhibiting at the Miami Beach Convention Center.

Local museums, private collections, and galleries have already announced plans for what they will be exhibiting to the world as Art Basel descends on South Florida. 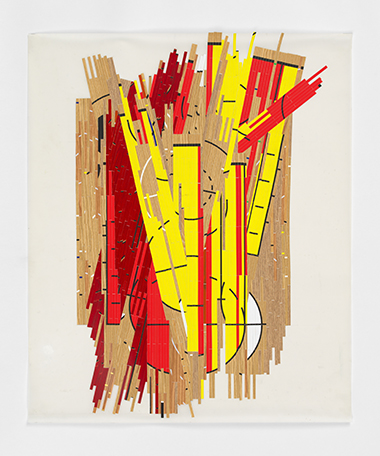 Ronny Quevedo "At the line" (2021). Screen print contact paper and vinyl on mylar - 36 x 30 in (Courtesy of the artist and Alexander Gray Associates New York). Quevedo's work will be on exhibit in the Design District at Locust Projects during Art Basel Miami Beach.

Inside the Miami Beach Convention Center will be 283 premier galleries, which organizers say is the largest show in Miami Beach to date, including 26 first-time participants as well as multiple exhibitors returning after a brief hiatus. More than half of this yearâs galleries have principal gallery locations in North and South America, joined by new and returning exhibitors from Africa, Asia, and Europe. 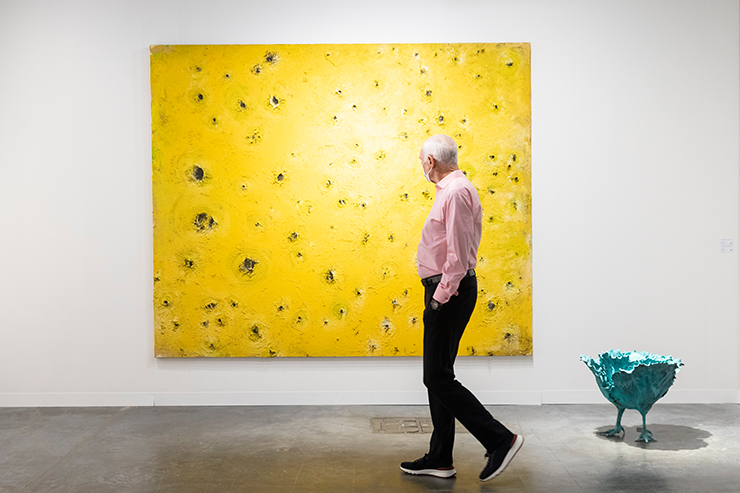 "It is truly exciting to celebrate our 20-year presence in Miami Beach," saidMarc Spiegler, Global Director, Art Basel. "Over the last two decades, our show has not only reinforced its pivotal position in the region â uniquely bridging the art scenes of North and South Americas, Europe, and beyond â but also played a galvanizing role in the cityâs profound cultural transformation. The increasingly diverse range of galleries and artistic voices represented will make our show richer in discoveries than ever before."

The Mayor of Miami Beach, Dan Gelber, added that: "So much of our investment in our cultural assets and amenities is a result of Art Baselâs example." 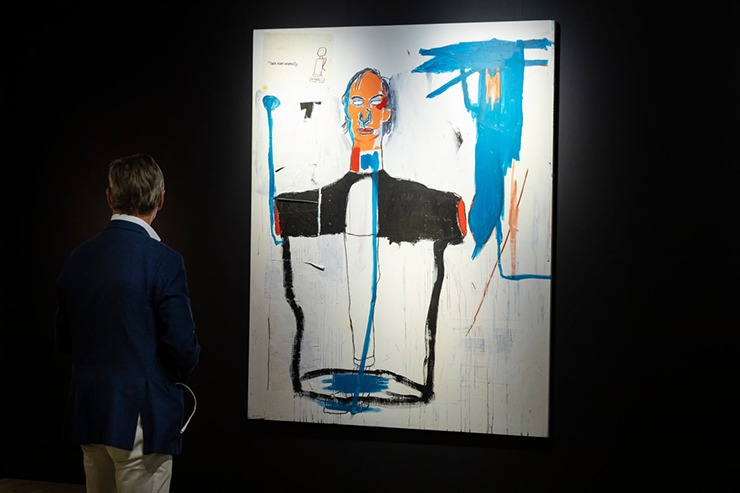 The fairâs main sector features 213 of the worldâs leading galleries.

Several exhibitors will return to the fair following a hiatus, including Galeria Raquel Arnaud from SÃ£o Paulo; Karma International from Zurich; Galerie Barbara Thumm from Berlin; Marlborough with exhibition spaces in Barcelona, Madrid, London, and New York; and Lia Rumma from Milan and Naples.

For the full list of exhibitors in Galleries, go toÂ artbasel.com/miami-beach/galleries.

For the full gallery list for Positions, go toÂ artbasel.com/miami-beach/positions.

Dedicated to galleries presenting new work by up to three artists, the Nova sector will feature 22 presentations from 23 galleries.

Highlights include a solo presentation of new photographs and sculptures by John Edmonds, which continues his inquiry into human form and African art at Company Gallery; newcomer Yavuz Galleryâs exhibition of work by Pinaree Sanpitak, following her workâs inclusion in "The Milk of Dreams" by Cecilia Alemani at the 2022 Venice Biennale; drawings and sculptures by Ukrainian artist Nikita Kadan, some of which have been realized in his current refuge shelter in Kyiv, at Galerie JÃ©rome Poggi; newcomer K Artâs presentation of works by internationally-acclaimed artist Edgar Heap of Birds and emerging artists Erin Ggaadimitis Ivalu Gingrich, and Robyn Tsinnajinnie, whose works thread together a compelling narrative of Indigenous perspectives; and a dual installation by Los Angeles-based artists Anabel JuÃ¡rez and Greg Ito, whose work explores the immigrant experience through a range of practices, from painting to large-scale sculpture and wall-based installation, on view at Anat Ebgiâs booth.

The sector will also include a joint booth by Super Dakota and Helena Anrather, with a presentation of works by Julia Wachtel investigating the construction of emotion and identity through media and mass culture.

For the full gallery list for Nova, go toÂ artbasel.com/miami-beach/nova. 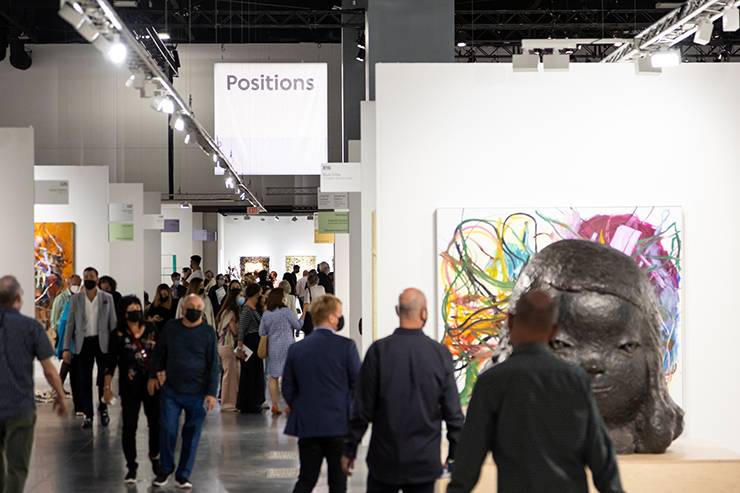 Highlights include a historical presentation of rare wood, marble, and bronze sculptures and works on paper by Cuban artist AgustÃ­n CÃ¡rdenas at Galerie Mitterrand; the second overseas solo exhibition of work by Japanese artist Ei-Q, including newly discovered photo-dessin and photo-collages, hosted by newcomer Watanuki Ltd. / Toki-no-Wasuremono; a debut art fair presentation of historic works from the 1970s to the 1990s by Milford Graves, with a range of mediums from multimedia sculptures to works on paper, at Fridman Gallery; Cristin Tierneyâs booth of historic works by Dread Scott presenting a study of violence from the last 15 years of the 20th century; works from the two principal creative periods of Spanish artist AurÃ¨lia MuÃ±oz, whose work has been exhibited at the Museum of Modern Art in New York, and recently at the Guggenheim in Bilbao, at newcomer Jose de la Mano.

For the full gallery list for Survey, go toÂ artbasel.com/miami-beach/survey.

Information on the Meridians and Kabinett sectors will be released in the coming weeks, along with details on additional fair programming, including 20th anniversary highlights.

The 18th edition of Design Miami/ will take place concurrently to Art Basel Miami Beach from Nov. 30 to Dec. 4, 2022, with a VIP preview day on Nov. 29, 2022. Design Miami/ will bring together world-class presentations of 20th- and 21st-century design, hosting a global forum for collectible design. For more information, go toÂ designmiami.com.