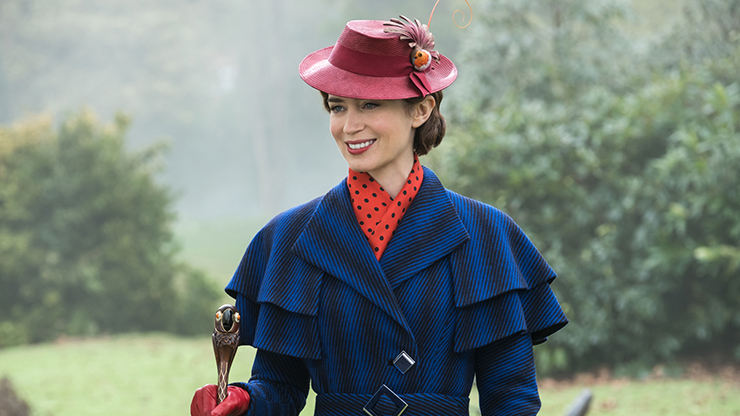 Imagine the pressure that the makers of âMary Poppins Returnsâ must have been under. Disney's highly anticipated holiday release not only reanimates Uncle Walt's squeaky clean take on P.L. Travers' children's books for a movie going public that may not necessarily have emotional ties to the source material or the 1964 film. It also aims to please a fickle audience, extending across multiple generations and demographics, that holds the practically perfect nanny near and dear, to their hearts and as such has sky-high expectations about this new chapter. 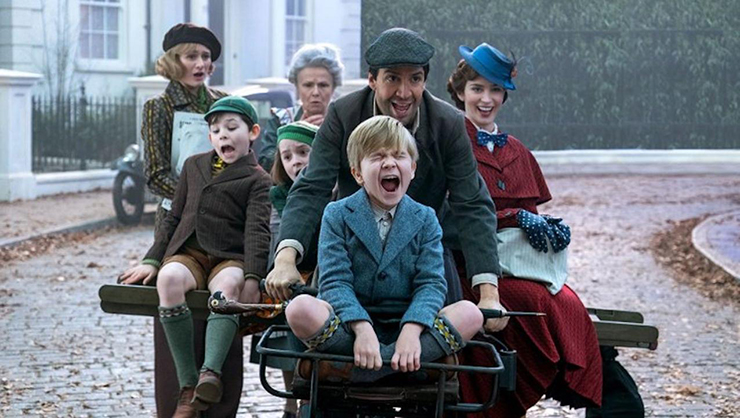 So let's give credit where credit is due to this long-gestating sequel: It doesn't suck. Thanks to a competent cast headlined by Emily Blunt and Lin-Manuel Miranda, as well as lavishly retro production values bolstered by a vivid color scheme, the follow-up to the Oscar-winning screen musical that turned Julie Andrews into a household name remains consistently watchable. That's good news, because the magic touch that endeared its predecessor to audiences of all ages for decades largely eludes this pedigreed, but curiously, earthbound effort.

And boy, does it try to recapture lightning in a bottle. So much so that this reintroduction to Travers' nanny hews rigidly to the episodic structure that helped keep moviegoers coming back for more throughout multiple theatrical reissues. The year is 1935, decades after we last saw Mary floating away into the London sky. The wide-eyed Banks children who ooh'd and aah'd when their play date fantasies came to life are now all grown up, and dealing with all kinds of grown-up issues. Michael (the esteemed Ben Whishaw, aka the voice of Paddington Bear) is now a widower, raising his three children with the help of his sister Jane (Emily Mortimer), now a labor organizer, and his housekeeper Ellen (the ubiquitous Julie Walters). Michael doesn't want to scare his loved ones, but the bank is getting ready to swoop in and seize their home on Cherry Tree Lane. 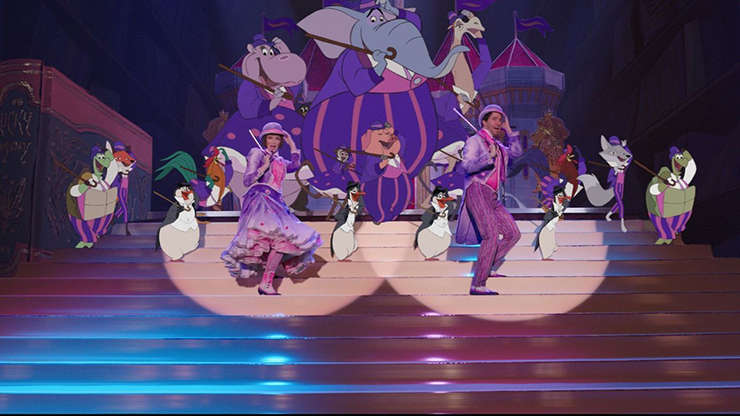 Saddled with a looming deadline and crippled by grief, Michael could have easily sunk this tale into the wet-blanket dourness that ruined this past summer's âChristopher Robin.â But Whishaw is much too captivating to let that happen. Director Rob Marshall (âChicago, âInto the Woodsâ) understands the Bankses' heartache forms the film's emotional core, so no matter how many whimsical detours the movie takes, it all comes back to a once well-off family going through hard times. That makes all the difference here, considering the Oscar-nominated helmer isn't exactly known for his creativity behind the camera. Let's just say his point-and-shoot approach doesn't do this fanciful material any favors.

Marshall ends up leaning heavily on his cast, which also includes a villainous turn by Colin Firth as the bank president who can't wait to get his hands on the Banks residence, as well as pleasant cameos by Angela Lansbury and Dick Van Dyke as, respectively, a balloon lady with a special gift and the son of the bank chairman he portrayed in the first film.

A ginger-haired Meryl Streep hits a sour note as Mary's Eastern European cousin, a character that veers dangerously close to a Balkan stereotype. As for Miranda, he capably assumes Van Dyke's second banana duties as Jack, a lamplighter with an extra spring on his step, but the âHamiltonâ wiz doesn't come close to matching Van Dyke's effortless Cockney charisma. Like much of âMary Poppins Returns,â he's trying too hard.

Which places most of the heavy lifting squarely on Blunt's shoulders. How is she, you ask? She's good, albeit nowhere near Andrews' ballpark. Not even close. In all fairness, she faced a Herculean challenge when she took on this role and was still able to step into the iconic nanny's shoes with confidence and grace. Part of what keeps her from being a more captivating Mary is that she's too tart. It's a quality that's worked well for her in past performances, but here it comes across as slightly too vinegary. By contrast, Andrews was able to strike a more appealing balance warmth and tough love. Blunt needed more than a spoonful of sugar to help this medicine go down in a more delightful way, but she keeps this uneven trip down memory lane from sinking under the weight of its pedestrian staging. 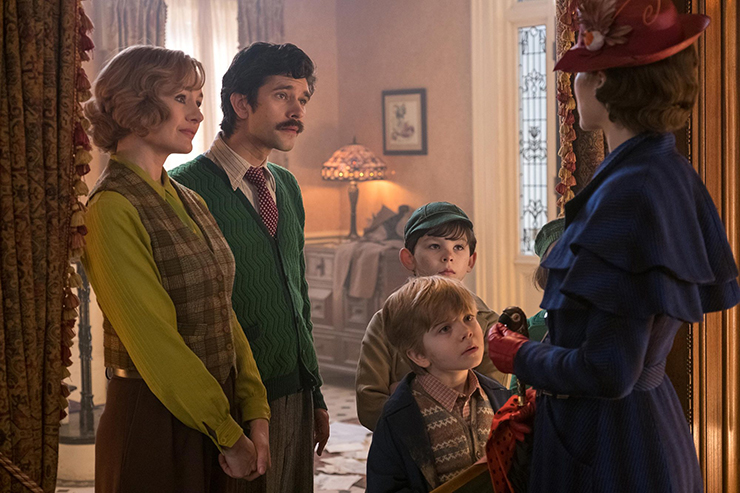 So what about the film's slavish devotion to the story beats from the first âPoppinsâ? It's certainly drawn criticism from moviegoers and critics alike, but I didn't mind it so much, because within that framework, Marshall tries to do some things that feel relatively fresh. Take, for instance, the film's strongest sequence, which transports Mary, Jack and Michael's children from their bedroom into a decorated plate where the actors find themselves interacting with animated anthropomorphic animals that bring to mind those in Disney's animated âRobin Hoodâ from 1973. (Firth pulls double duty voicing a greedy wolf, and Irishman Chris O'Dowd charms as, what else, an Irish dog.)

Working from a screenplay by David Magee, Marshall takes the characters under a big top for a nicely rendered musical number that shows a more worldly side of Mary. Think of Bob Fosse, only more wholesome and kid-friendly, and you get the candy-colored picture.

So the problem isn't so much that âReturnsâ apes thematic and structural elements from the first film (as well as âBedknobs and Broomsticksâ), but that Marshall has trouble making most of those elements pop. More problematic for this reviewer are the new songs, which are mildly likable at best, nondescript and forgettable at worst. It's been several weeks since the film was screened for critics, and beyond the chorus of the bittersweet âThe Place Where Lost Things Goâ and the bouncy âThe Royal Doulton Music Hall,â I can't remember a single darn thing about these ditties. Composer Marc Shaiman, who wrote the lyrics with Scott Wittman, is clearly stoking those embers of nostalgia, but it's difficult to be swept along when the music all but vanishes from memory seconds after that final cut to black. It's unrealistic to expect the songs to come within spitting distance of what Robert B. and Richard M. Sherman pulled off in the 1960s; Andrews aside, they're the first film's not-so-secret weapon. The new tunes still amount to a missed opportunity.

But even if âReturnsâ isn't nearly as clever and lively as one would hope, it still merits an umbrella ride to the theater, thanks to its commitment to exploring the Bankses' domestic woes, and also for its richly saturated look. Cinematographer Dion Beebe, production designer John Myhre and costume designer Sandy Powell fill the screen with a vibrant mix of pastels and primary colors. Powell, in particular, appears to be having a ball dressing up Blunt, to the point that you look forward to the (many) costume changes Mary undergoes throughout the film. I might be on the fence about this latest legacy sequel from the corporate rodent, and I'm most definitely skeptical about its shelf life, but for easily digestible screen diversions, Disney fans could do far worse.

Call this pleasant underachiever matinee fodder for the Arsht Center crowd 54 years in the making.

âMary Poppins Returnsâ is now out in theaters on wide release in North America, including the spiffy Silvespot Cinema in Downtown Miami and the Dolby Theaters at AMC Aventura and Sunset Place. 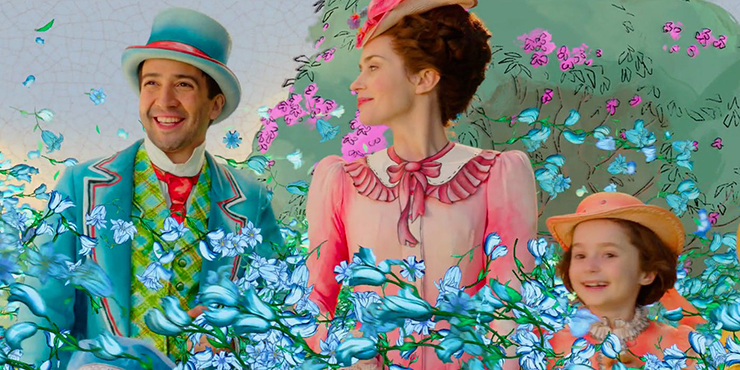