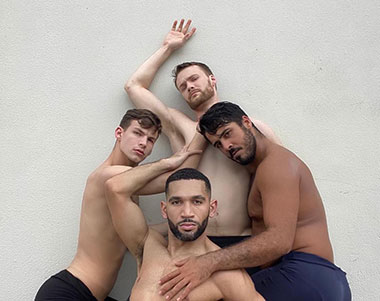 Dance Now Miami will showcase the world premiere of two modern dance choreographed productions at both Broward Center in Fort Lauderdale on Saturday, May 15 and at Miami Theater Center in Miami Shores on Saturday, June 19.

Dance Now choreographers and founders Hannah Baumgarten and Diego Salterini teamed up to produce world premiere of the Jewish themed âAnusim: What Is Hidden Is Never Lostâ that will feature eight Dance Now Miami dancers.

According to Baumgarten, the dance is inspired by the 1497 decree in Portugal that forced all Jews to be baptized as Christians, but that also gave those who were Jewish the right to practice their own religion in secret.

âBeing Jewish, I had grown up learning about the plight of Jews during the Spanish Inquisition, about the Marrano Jews of Spain that would no longer follow any tradition of Jewish culture in public, but in the privacy of their homes would have family traditions such as lighting two candles every Friday night in honor of the Jewish Sabbath,â said Baumgarten.

âDiego (Salterini) and I discovered that the same events of 1497 were also taking place in Portugal. What the audience will see on stage is the dichotomy that occurred in Portugal in which Jews would essentially be Catholics in public and, in private, would hold on to their Jewish traditions and cling to their inner desires to be Jewish.â

Baumgartenâs father is a Holocaust refugee who was born on a ship fleeing Vienna prior to World War II and was raised in Panama before emigrating to the United States in 1956.

âAnusim: What Is Hidden Is Never Lostâ is one of a number of Jewish themed modern dance productions that Baumgarten choreographed and produced for Dance Now Miami. 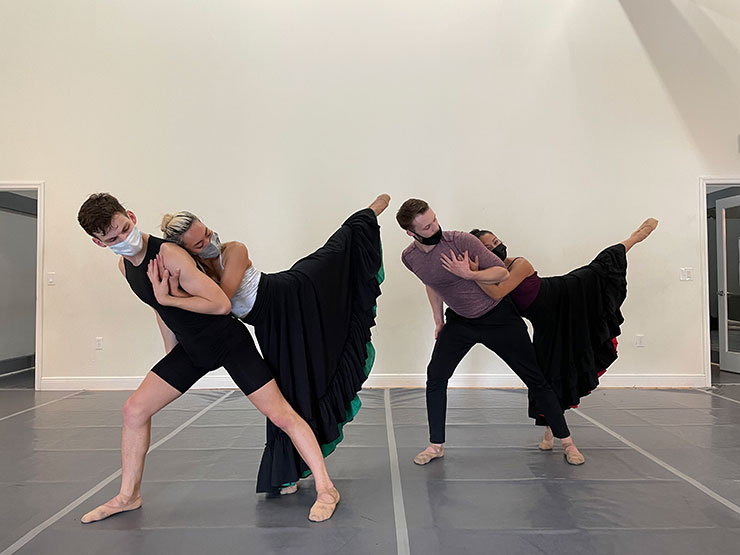 âAnusimâ From left to right: (performing wearing masks only in rehearsal): David Harris, Isabelle Luu Li Haas, Matthew Heufner and Allyn Ginns Ayers in the world premiere of âAnusim: What Is Hidden Is Never Lostâ on May 15 at Broward Center and June 19 at Miami Theater Center.

Other Baumgarten Jewish themed Dance Now productions include âCelebration Of Lifeâ (on Hanukkah), âDonneâ (on The Holocaust) and the Carolyn Dorfman choreographed âOdiseaâ.

âThe dances are Jewish themed, but are meant to showcase stories that all groups of people can relate to with legal edicts forcing people to hide who they are.â she says.

âAnusimâ¦â features the original music of Frederico Bonacossa and the voice of Miami singer Susana Behar to accompany the production. Following the performances at both Broward Center and Miami Theater Center, Dance Now Miami will showcase âAnuismâ¦â during its tour in Portugal in late June.

âIâm very excited to be performing in Portugal and look forward to the response of many in the audience who will see âAnusimâ¦â at their local Jewish community center in the city of Cascais, Portugal.â

The second world premiere production by Baumgarten and Salterini is âDorianâs Reflection,â whichÂ  was inspired by the Oscar Wilde 1890 novel and 1946 film âThe Picture Of Dorian Gray.â

Baumgarten explains that the classic story of how Dorian leads an immoral life, being handsome and young while the image of his portrait ages lends perfectly to dance and "Reflection" explores moral fear, loneliness and loss in a contemporary way.â

âThe contemporary issues that still address the plight of Dorian include the obsession of smart phone pictures, plastic surgery, among other vices that are addressed in the dance,â said Baumgarten. 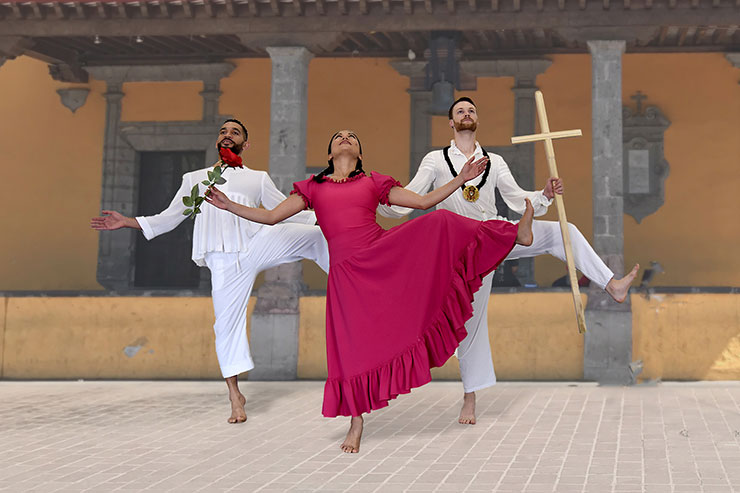 The third dance in the Broward Center program (but, which will not be featured in June at Miami Theater Center) is âLa Malinche,â choreographed by Jose Limon for his own dance company in 1947.

âLa Malincheâ is based on the real life story of a woman who played a key role in the Spanish conquest of the Aztec Empire and is a legendary character in the history of Mexico.

In its place at the Miami Theater Center performance will be "Caravan," a co-production of Dance Now Miami and Opus Ballet in Italy.

âCaravanâ is a commentary told though dance on the tensions arising from the cultural conflict in the European crisis of immigration and migration.

Both the Broward Center and the Miami Theater Center Dance Now Miami programs are taking place indoors, so ticket sales are restricted to pods of two to four patrons and the audiences will be masked.

âAll our dancers have been vaccinated, so we are confident that both our dancers, staff and audiences will be in a safe environment,â said Baumgarten.

Costume designer Haydee Morales, a costume maker for Miami City Ballet dancers, along with her daughter Morales, created the many outfits that will be worn in the shows.

Dance Now Miami presents two world premieres âAnusim: What Is Hidden Is Never Lostâ and âDorianâs Reflection,â both dances choreographed by Hannah Baumgarten and Diego Salterini and Jose Limonâs choreographed, âLa Malincheâ on Saturday, May 15 at 8 p.m. at the Amaturo Theatre of Broward Center, 201 SW Fifth Avenue in Fort Lauderdale. Tickets are $45 and $15 for students, available only in allotments of two or four patrons seated together wearing asks. For more information and to purchase tickets, go to .dancenowmiami.org or browardcenter.org or at 954-462-0222.

Dance Now Miami presents the two world premieres from the Broward Center program plus âCaravanâ in conjunction with Opus Ballet in Italy on Saturday, June 19 at 8:30 p.m. at Miami Theater Center, 9806 NE Second Ave. in Miami Shores. Tickets are $40 and $15 for students, available only in allotments of two or four patrons seated together wearing masks. For more information and to purchase tickets, go to dancenowmiami.org or mtcmiami.org or at 305-751-9550.