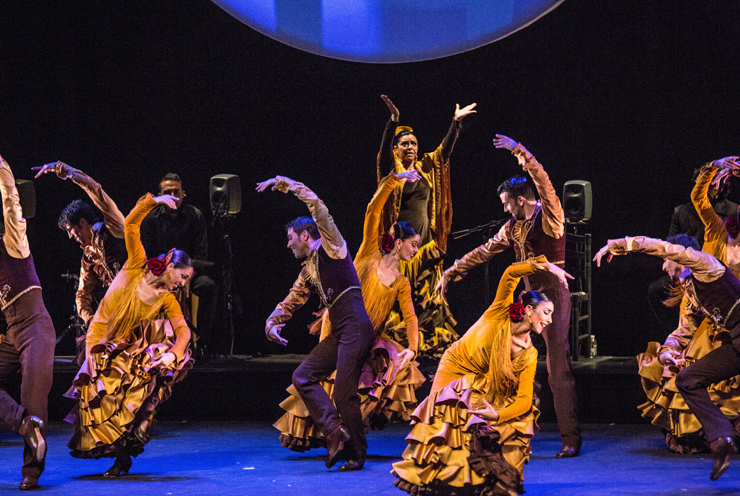 Flamenco dance is fairly ancient, dating to the 1700s when it originated in Andalusia, Spain. But the Ballet Nacional de Espana, led by choreographer and dancer Antonio Najarro, put a modern spin on this time-honored dance with Suite Sevilla at the 11th annual Flamenco Festival Miami. The show was fun, delighting and impressive for a modern audience. Produced by Flamenco Festival and Flamenco Festival Worldwide, the event took place from Thursday, March 8 to Saturday, March 10 at the Adrienne Arsht Center with four performances of Suite Sevilla and a special closing night performance of Andalusian Voices: Tempo of Light.

Flamenco epitomizes the style of Spanish culture, and most people of Spanish descent, including many Cubans like myself, grew up embracing the art form from their family. My mother gave me a pair of castanets that she bought on a trip to Spain, where we saw the Flamenco dancers perform live in the street.

Taking place in multi-cultural Miami, the festival naturally drew large crowds. The opening night show of the Ballet Nacional Espana's Suite Sevilla on Thursday evening was packed. Not one seat was left empty in the auditorium. Some women took the celebration a step further and arrived in full dress, wearing shawls mantillas around their shoulders, hair wrapped in buns with decorative combs, and long dresses with ruffled skirts. 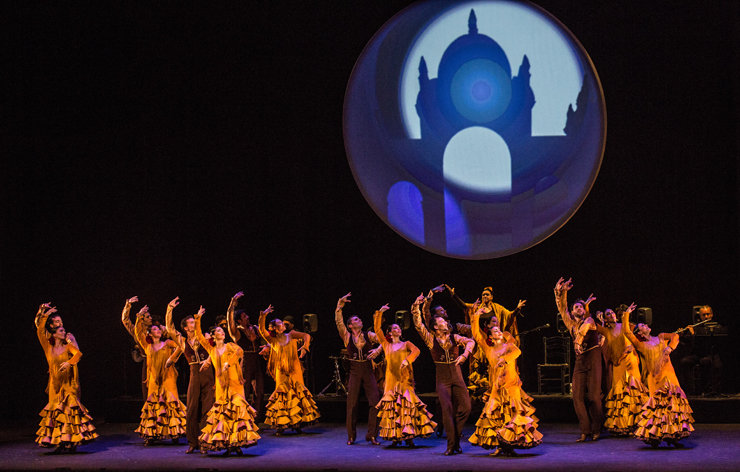 On stage, however, the traditional flamenco outfits were refashioned into modern versions for the twelve separate scenes of the production. The first set, titled "Feria" (Fair), opened with a line-up of ballerinas in yellow dresses and ballerinos in dark suits with matching yellow sleeves. The eighteen dancers (nine women and nine men) all played the castanets and stomped tap shoes in a synchronous manner setting the stage for the bravado of the evening. A large orb on the backdrop of the stage acted as the moon, the sun, or a decorative element in each of the twelve different scenes according to the theme and mood.

The female singer of Suite Sevilla, Saray Munoz came onto the center of the stage at the end of this opening sequence to introduce herself and her magnificent, powerful voice to the audience. Throughout the rest of the performance, the musicians, and vocalists, including Munoz and her male counterpart Gabriel de la Tomasa, were seated at the back of the stage, performing the music live. Along with the two singers, there were three guitarists, a cellist, a flutist, a violinist, and a percussionist. 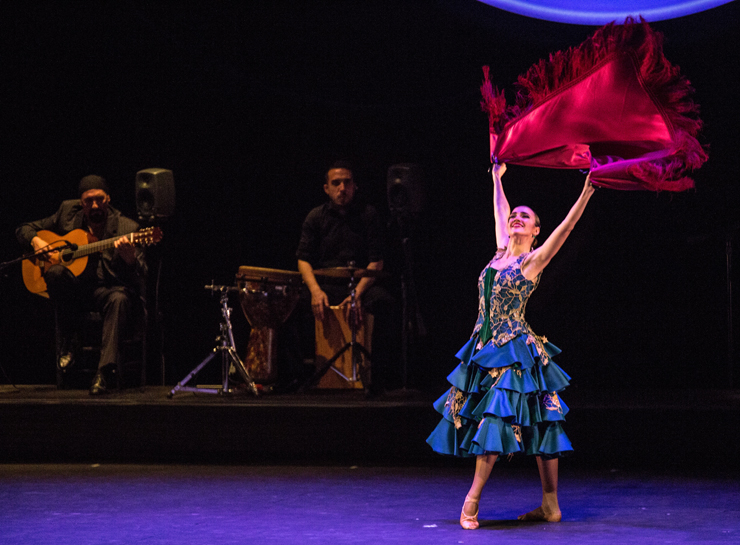 In "Calle Del Infierno," the second act depicted above, ballerina Debora Martinez presented a dance of beauty, style, and grace. She exuded passion and fire with her every move. On traditional pointe shoes, she graced the audience with expertise in classical ballet moves and even pirouetted flawlessly. She did it all with a huge smile on her face in a stunning blue and gold dress, a red shawl and bright red lipstick. 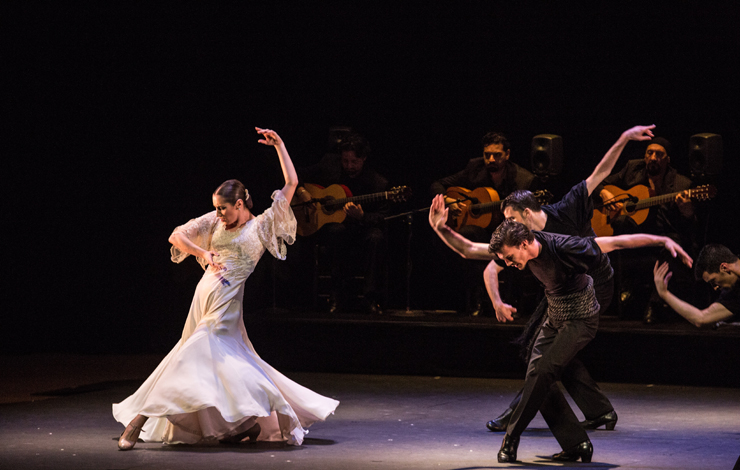 Facial expressions are a large part of the emotional performance, and here every act had a different tone. Some of the acts like "La Alfalfa" were dark and solemn, while others like "Feria" were joyful and vibrant. The facial expressions on the dancers coincided with the feeling of the scene.

For instance, in "La Alfalfa," the mood was mournful, and the female dancers frowned and looked as though they were crying. The women wore stylish, modern black dresses and mantillas of black lace, symbolizing their grief for Christ, and the men wore black pants and shirts with ropes tied around their waists, acting as cross-bearers. An image of a crucified Jesus was silhouetted in the circle on the stage. The dance was slow and heavy, with loud stomps and elongated quivering bodies to mimic the crucifixion. The scene referenced La Semana Santa or Holy Week in Sevilla, a major tradition in the country. The ensemble following "La Alfalfa" titled "Esperanza" (Hope) showcased one female dancer in a white wedding dress to represent the Virgin Mary and a group of ten male dancers, the same cross-bearers dressed in black. She seemed to be the object of the men's attention as they followed her along the stage attempting to seduce her into their arms. 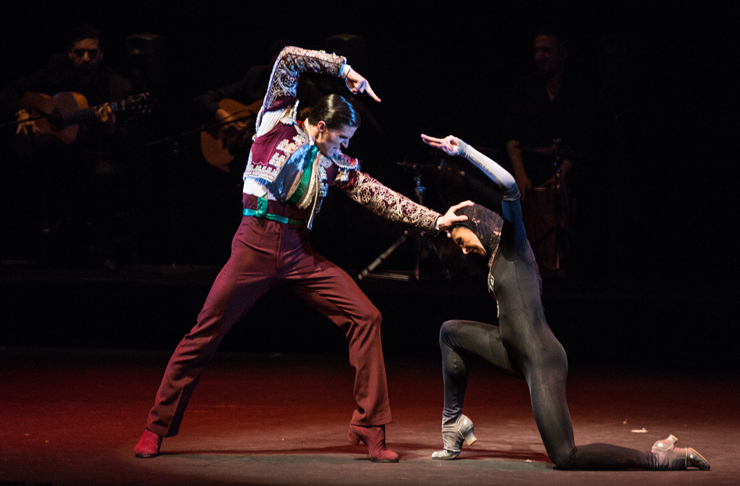 There was plenty of passion, romance, longing, and nostalgia in the show as one would expect from Flamenco. Yet, the creative interpretation of these emotions was quite unexpected. In "Maestranza" the scene was a Sevillian bull plaza. The bull was a first ballerina dressed in a black leotard and the bullfighter was a ballerino.

With a muscular and toned physique, Alona Alonso moved and jerked around the stage in vigorous animalistic motions attempting to escape from the man trying to subdue her, Sergio Bernal. Together they created a spectacular dance of passion, seduction, and attraction using the metaphor of a bullfight. 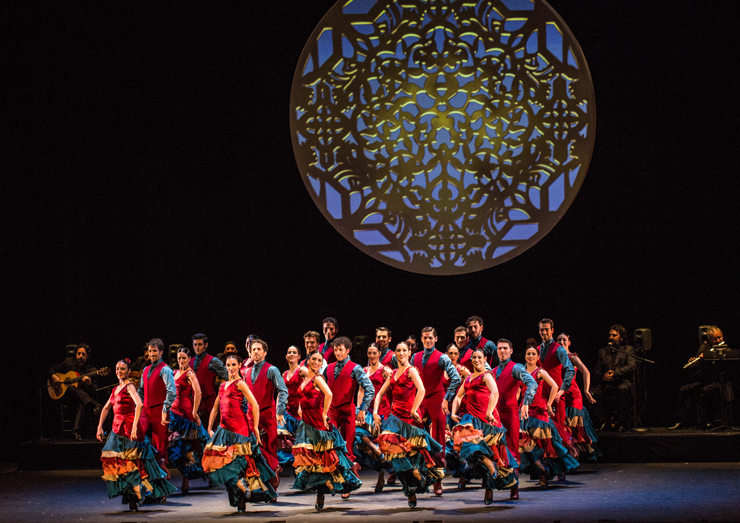 Twelve different acts, marvelous costumes and sets, vibrant, expressive, and talented singers, musicians and dancers, universal themes, and modern choreography, provided a two-hour evening, where each moment was exciting. The audience showed its appreciation with cheers, bravos, applauds and a standing ovation.