'Borrowed' Goes In The Round at Miami Ironside 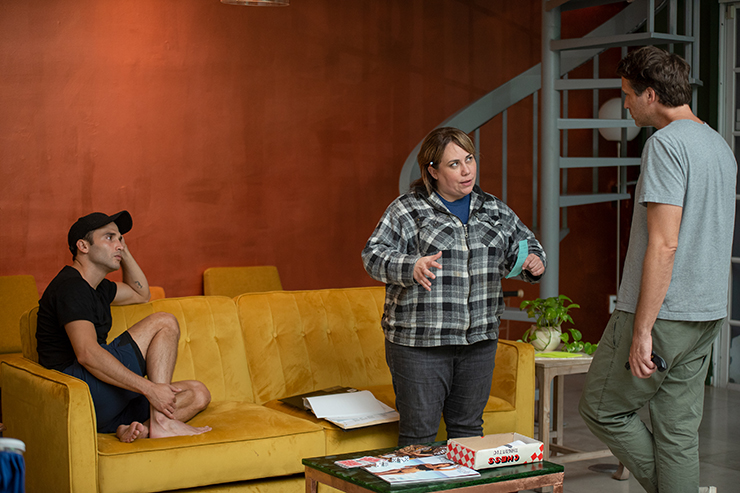 Melissa Almaguer directing Caleb Scott, who plays David, as Ernesto Reyes (Justin) looks on in rehearsal for the original play "Borrowed," which gets its world premiere in Miami. (Photo by Roger A. Gonzalez Oropeza)

The Game Room, an all-purpose event space housed in Miami Ironside, is being transformed into an intimate theater for the world premiere of a new play whose route has been circuitous. "Borrowed" was born during the pandemic,Â  a psychological thriller by Jim Kierstead that was presented as a streamed Zoom reading.

Then "Borrowed" became a film shot in the Normandy Isles neighborhood of Miami Beach and in locations in Key West.

It's now being staged as a play opening Thursday, June 23, and running through Sunday, July 17.

"Borrowed" is the story of a reclusive, Army veteran in his 50s, and another man, who is much younger, who come together one night, ostensibly for sex. The encounter becomes far deeper as the characters engage in a cat-in-mouse game, ultimately exploring the themes of loneliness, forgiveness, and love.

The play is a first for Kierstead, who is more a Broadway producer by trade than a playwright. Just several days ago, Kierstead was at Radio City Music Hall, picking up his most recent Tony awards, for âThe Lehman Brothers,â and âCompany,â to add to the four heâs already garnered for âKinky Boots,â the revival of âPippin,â âHadestownâ and âThe Inheritance.â

During the COVID-19 pandemic, Kierstead learned that the Adrienne Arsht Center for the Performing Arts was seeking monologues that could be performed as part of a reading. Having written "Borrowed," during frequent long plane trips from New York to Los Angeles, he plucked out a monologue, and submitted it, sans his name. Being well-known to the Arsht, "I didnât want them to feel awkward if it was rejected," he confides. 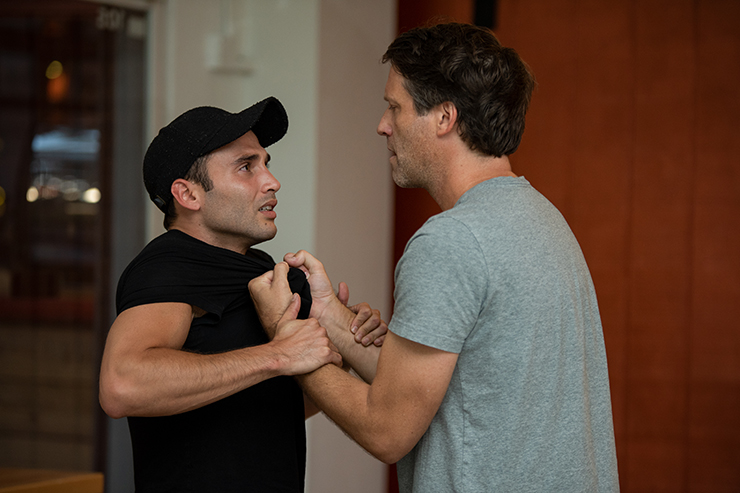 Ernesto Reyes and Caleb Scott in "Borrowed." (Photo by Roger A. Gonzalez Oropeza)

The performance of the monologue sparked interest in the full play, which was performed as a virtual streaming production, then, ultimately, to turning it onto a film, for which Kierstead and his producing partner, William Fernandez, teamed up with Miami filmmakers Ernesto Ortiz and Carlos Rafael Betancourt. The setting for the Made in Miami production, was shifted to Key West (it was shot there and in Miami Beach) and the film debuted at the Miami Film Festival in March.Â

But this brings us back to the new in-person stage production, which returns to its setting on the Jersey shore, and is being produced by Broadway Factor, a theatrical performance company founded by Kiersten and Fernandez, among others.

Directing is Melissa Almaguer, a juggler of many creative hats, including acting, directing, and even co-founding the independent theater company, White Rose Miami, to name just a few. Most recently, she served as line director for the film version of "Borrowed."

Playing David is Caleb Scott, an actor and writer who most recently appeared in Miami New Dramaâs COVID-19 production, which took place in different venues and allowed for audiences to be outdoors,Â  "7 Deadly Sins."

His other regional theater credits include Miami New Dramaâs "The Cuban," Zoetic Stageâs productions of "Dracula" and âDancing Lessons,â which earned him a Silver Palm award and a Carbonell Award for Best Actor. He also has numerous New York stage and regional theater credits, and numerous television appearances as well, and he is currently writing and performing stories for a podcast based on real-life Florida headlines, "Worst Place on Earth."

Playing opposite Scott as Justin is Ernesto Reyes. Known for playing diverse characters on screen, television, and theater, Reyes was studying at the Stella Adler Academy of Acting & Theater in Hollywood, Calif., when he landed his first Hollywood role in the Starz International TV series âAmerican Gods,â in which he played the role of Mexican Jesus.

Ernesto Reyes as Justin and Caleb Scott as David in the world premiere of "Borrowed." (Photo by Roger A. Gonzalez Oropeza)

His other recent works include his debut leading role in âLUZâ (2020), a Jon Garcia feature film that premiered at the Outshine Film festival in South Florida, and the short film âSmoke, Lilies and Jade,â (2021). Heâs also been part of the cast of the NBC soap opera "Days of Our Lives."

"Borrowed" is billed as an "immersive theatrical experience," because the play takes place in an intimate space. It's also staged as theater-in-the-round, which is designed to make the audience feel like they are "right there with the actors," says Almaguer.

The result is that the play is intense, and that âthe audience doesnât get a break,â she says.

But what really draws audiences in is the interplay between the two characters, and their stories, which are revealed during the 90-minutes, she says.

"This play is about two characters who seem very different at first, but they come together to explore the walls we build, and what happens when those walls fall, and the changes that come about," explains Almaguer.Â  "That is where the drama is."