Nestled in the lush beachfront corners off the Rickenbacker, Virginia Key Beach Park provides a beautiful escape from the burdens of city dwelling. Yet, the sandy, palm-tree-lined grounds reveal more than natureâs secrets. The 70-year-old campgrounds also dispel a history of segregation; an âonly coloredâ beach in the 1940s, the park today is a site for uniting the community through the arts and culture.

Taking place beginning on Thursday, Feb. 19 through Sunday, Feb. 22, the fourth-annual Virginia Key GrassRoots Festival of Music and Art will host a special multi-media performance to commemorate the anniversary of the natural treasure, where the festival has occurred for the past five years. The event will celebrate the evolution of the park from a dwelling space of racial division to a natural location of community building. 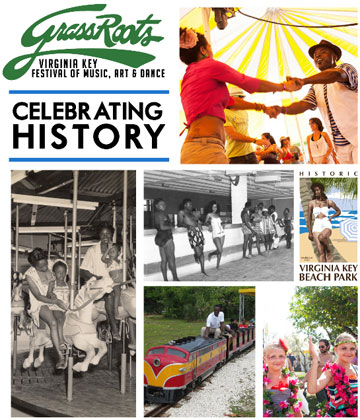 In addition to the special anniversary event, the four-day festival will host a vast array of entertainment including live-music. With live music as the focal point, 50 bands will perform on four stages. A huge main stage for the performers will rise from the center of the festival grounds while the other stages will surround the grounds. Musical highlights include Afrobeta, AJ Ghent, Cortadito, Donna the Buffalo, Driftwood, Spam Allstars, SuÃ©nalo, Swear & Shake, and Telekinetic Walrus.

Also along the waterfront periphery, tents will be set-up, each holding the key to another universe. The key is cultural evolution. Tents rising at this yearâs festival will include the Zen Village of Coconut Grove, which will present Healing Arts with yoga, meditation, and tea ceremonies; the Music Tent with drums, digeridoo, rhythm and chant workshops; and the Dance Tent, where Zydeco, West African Chika, Salsa, Bachata, and African Drum and Dance will be taught to participants.

The festival also hosts the Sustainability Fair and Expo. The Sustainability exhibition will include a number of workshops related to environmentalism. In the Bicycle Repair Tent, visitors can learn to repair their two-wheelers while helping the less fortunate.

Bike-going attendees will get half-off admission on Sunday to benefit Heart for Humanity. There will also be workshops on Herbal Medicine and Edible Forest Gardens, where even city dwellers can join Earth Learning and explore the integration of landscaping and homegrown food. A Solar Demos and Charging Stations will be set up along the beach and Urban Gardening will be showing people how to grow herbs in containers such as wooden wine crates.

Art is an integral aspect of the festival as well. Yo Miami will curate a Live Art show and the artwork will be available for purchase upon completion to benefit another local arts organization Life is Art.

And, of course, there is the world-class food, itself a form of art at this festival. The GrassRoots World CafÃ© will be providing delicious pizzas, pastas, fresh tacos, paninis, smoothies, vegetarian and vegan dishes, and coffee and deserts to hungry festivalgoers.

The festival provides a refuge for both residents and out-of-town travelers looking for a weekend escape. Many camp under the stars in RVâs they drove cross-country, fleeing the winter and searching for good, sunny vibes. Letâs hope the weather allows them!

The Virginia Key Grassroots Festival of Music & Dance is the winter season festival of the year-round not-for-profit music, dance and arts festival series.