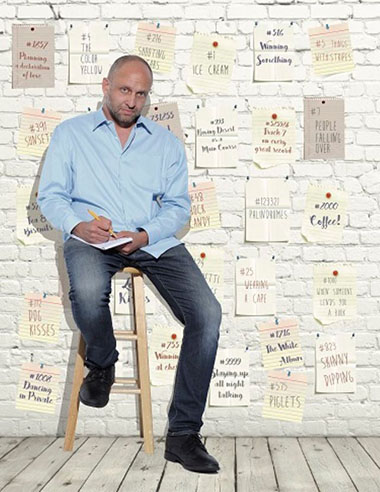 Add Gregg Weiner's performance to the list ofÂ  brilliant things now showing in the Carnival Studio Theatre at the Arsht Center. Weiner's talent and warmness of heart accomplish the almost impossible: making audience participation a thing of delight instead of its usual destruction of all things theatrical.

Duncan MacMillan wrote the, I'm guessing here, semi-autobiographical piece "Every Brilliant Thing," detailing his life with his suicidal mother and distant father. It's a sad play: a 7 year old boy, a teenager, college graduate, married man dealing with his mother's impending death, but the play's construction brings a surprising lightness to the affair.

Weiner is the sole professional actor. He's in the house before lights down, working the arriving audience, urging their participation. He hands out numbered cards, each referring to an item on his list of brilliant things, things that make life worth living, things that might lessen his mother's depression.

As the show progresses Weiner, telling his story, calls out numbers and the audience member holding that numbered card answers with it's message, item or activity: âskinny dipping,â âice cream.â Another item for the list of notes left for his mother. Eventually they reach one million, trundled on stage in cardboard boxes.

Audience participation starts early and runs throughout the 70 minute show and this is where Weiner excels, as he charms his volunteers into instamatic acting. Impressive and entertaining. A vet, euthanizing the child's dog, his father driving him to hospital, his teacher, a college professor, his girl friend and soon wife. All appear and all add the tenderness and humor that make âEvery Brilliant Thingâ the success it is.

Co writer is English comedian Jonny Donahoe who performed the show originally at the Edinburgh Festival.

Stuart Meltzer directed with a touch that tapped the hardest of hearts.

Beautifully simple in the round set designed by Michael McKeever, with lighting by Rebecca Montero and sound by Stuart Meltzer.