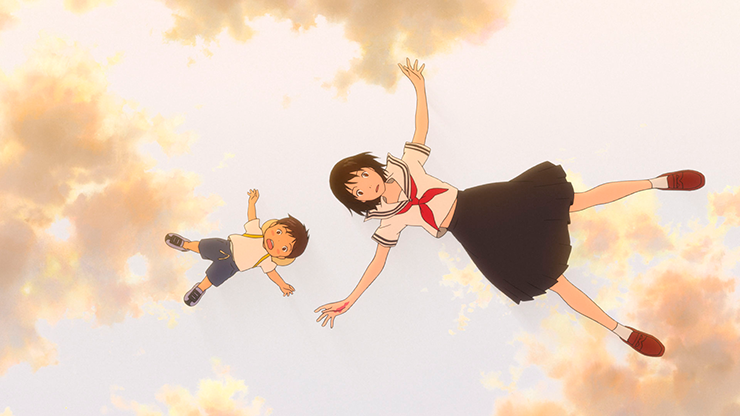 He leaves his toy trains scattered everywhere, yells at his barely-keeping-it-together parents when he doesn't get his way and is prone to attention-seeking sulking. There's no way around it: Kun, the cute but temperamental tyke at the center of the new animated feature "Mirai," is a brat. But then again, so were we all, at one point or another and to varying degrees, when we were four.

Let's be fair: When he's not being a total pain, Kun, saucer-eyed and full of mischief, is kind of awesome. He clearly loves his parents, both of whom work very hard to make sure those toy trains keep on coming. (His father is an architect by trade.) But it goes beyond that. Kun (the voice of Moka Kamishiraishi) has a very vivid imagination. It's going to come in handy when Mom and Dad bring his new sister home from the hospital. 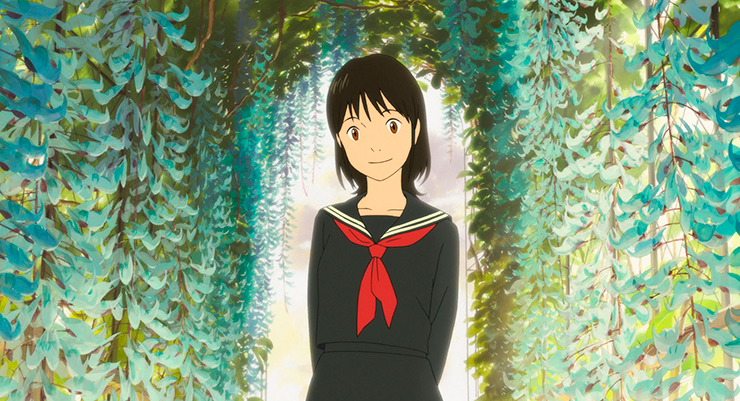 Director Mamoru Hosoda ("Digimon: The Movie," "Wolf Children"), well-regarded in his native Japan but not that well-known in these shores beyond fans of anime, renders the early scenes of "Mirai" in deceptively mundane fashion. Mundane, but also quite beautiful. Hosoda suffuses the moment Kun first lays eyes on her baby sister with a painterly purity that makes you thank the movie gods for traditional hand-drawn animation. The newborn, bearing a birthmark in her right hand, is, indeed, the titular character, and her name, her parents point out, means "future," a none-too-subtle hint of things to come. 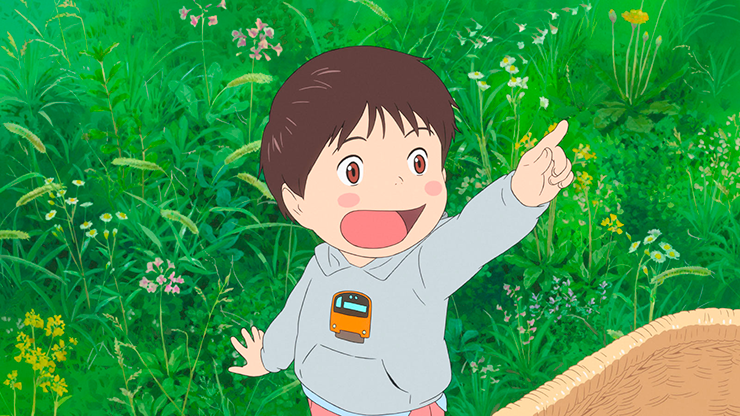 So begins a loving relationship between the siblings, informed by mutual affection and respect, right? No, not really. Kun starts acting like a spoiled little turd again when Mirai takes up his parents' attention and energy. His irritable behavior is conveyed by showing his head ballooning in size and his mouth opening to an impossibly wide degree. The cartoonish flourishes bring to mind the work of the late Isao Takahata ("The Tale of Princess Kaguya"). They're tempered by nuanced character animation that nails the distinctive body language of a young boy, down to the bizarre sleeping position that has him face down in bed with his butt up. What's striking is the way Hosoda is able to make viewers feel Kun's anguish and desperation, to the extent that, in the case of this reviewer, it brought up long-dormant memories that showcase just how painful those formative years can be.

It doesn't take long for Kun to have a meltdown, prompting his escape into daydreams where the garden in his modernist home becomes a portal into his id. But are these incrementally elaborate episodes figments of the child's imagination, or are they actually happening? That becomes harder to tell the moment Kun comes face to face with a teenaged Mirai (Haru Kuroki), school uniform and telltale birthmark in place. 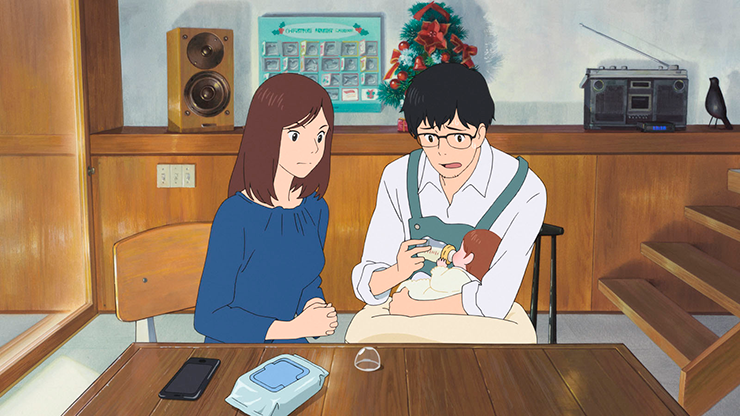 An average filmmaker would likely turn this scenario into a kid-friendly comedy with the expected beats and preordained sunny outcome, but Hosoda shows he's stubbornly resistant to anything resembling a high-concept formula. Instead, he opts for an episodic structure that yields one golden observation after another about the ties that bind. He uses time travel to construct a genealogical tree, whisking away viewers alongside Kun on a quest to uncover his loved ones' secrets and learn valuable lessons along the way. Miraculously, none of it ever feels gimmicky. Quite the contrary, the narrative flows with gentle stream-of-consciousness assurance.

The film's initial "fantasy" sequences might feel aggressively fanciful to some viewers. Hosoda's sensibility is an acquired taste, but once you become acclimated to his dream logic, he rewards your investment in these children who are allowed to be every bit as annoying and crabby as those on the other side of the silver screen. When Kun tries to learn to ride a bicycle, for instance, the movie makes no attempt to soften the blistering sting of failure. In other words, "Mirai's" eye-popping brand of make believe is firmly rooted in the everyday realities of growing up. 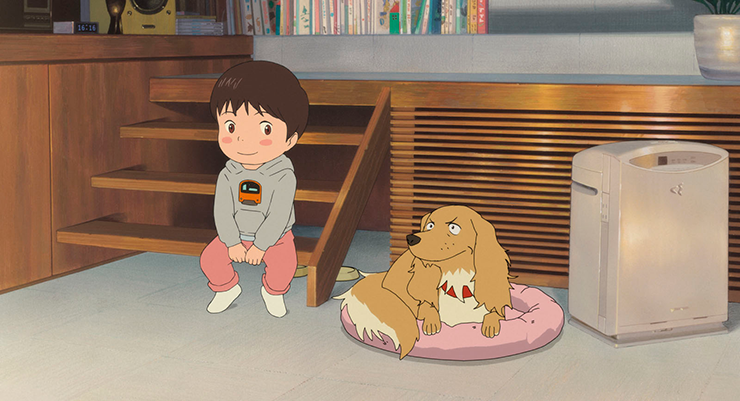 And nowhere is this more evident in the time Hosoda devotes to fleshing out Kun's mother (Kumiko Aso) and father (Gen Hoshino). Hosoda takes pains to delve into the ebb and flow of their marriage, so viewers feel like they have inner lives that are independent of their son and his time-hopping adventures. When Dad assumes homemaker duties after his wife returns to work, he is channeling the doting fathers in the films of Hayao Miyazaki, another significant influence in Hosoda's work. A montage that shows him juggling the demands of a homemaker trumps the way very similar subject matter is portrayed in this past summer's "Incredibles 2." These fully delineated characters help make an already captivating family portrait even more complete. 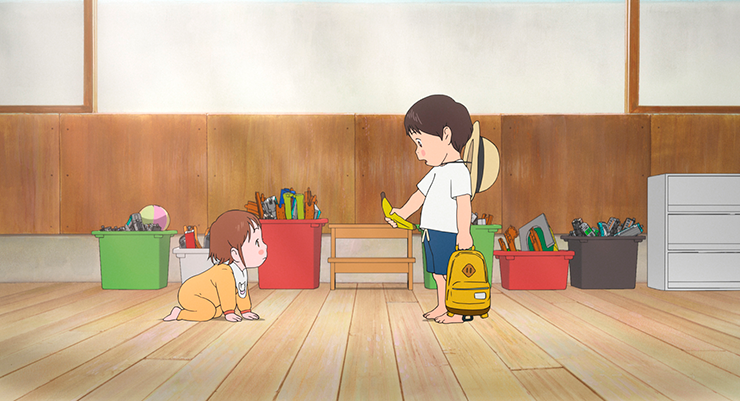 And that's ultimately Hosoda's endgame: not just an exploration of the joys and miseries of childhood but of the cross-generational hold family has on us. Strength we never know we had is imprinted on us before we are even born, and watching Kun unlock that potential, so his frown works its way into a smile, is unadulterated movie bliss. This is family entertainment with the blinders off, a trippy, irresistibly loopy jaunt through past, present and future that weaves a strange kind of magic. Your inner brat will beam, and wince in recognition.

"Mirai" is currently out on limited release. It screens Friday as part of Fathom Events at AMC Sunset Place 24 and Regal Sawgrass 23. Miami night owls can catch it Saturday at 11:30 p.m. at the Coral Gables Art Cinema.

It's scheduled to screen again on Dec. 5 at AMC Sunset Place, AMC Aventura Mall 24 and Regal Falls 12. Those averse to subtitles can catch an English dubbed version, featuring the voices of John Cho, Victoria Grace, Rebecca Hall and Daniel Dae Kim, on Dec. 8 at the same theaters as Dec. 5.