In the open-air atmosphere of the Palm Terrace by the Perez Art Museum Miami, environmentalist choreographer Dale Andree and multidisciplinary artist and choreographer Sandra Portal-Andreu will showcase what they've created as part of the artist residency, Live Arts Lab Alliance.

The multi-media presentations set for Friday, May 14 and Saturday, May 15 (the dates were moved up from Thursday after the threat of bad weather), addresses climate change, the fragile environment and explores heritage through multiple ages and generations.

âThe original Live Arts Lab was a program that provided an opportunity for local artists to work in a group setting for a month with an invited artist,â said LAM Executive Director, Kathryn Garcia. âThe first one was back in 2011, I think. Then we got a real space and LALA was created. We realized that the artists really valued the time with each other, the opportunity to be in community with other artists in Miami that are all making work.â 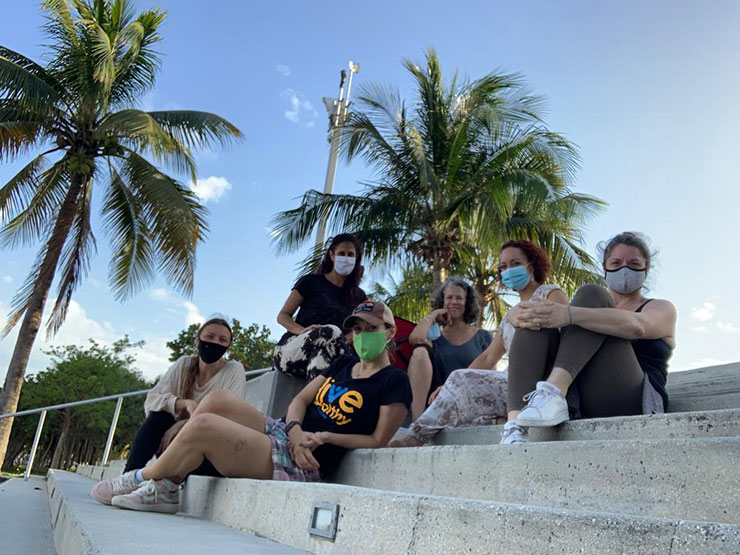 CIRCA/MIA explores visions of Miami's future based on drawings, interviews, and dialogue with 35-plus children across Miami-Dade County, and will be performed by six of the children's mothers. Performing Moms from left clockwise, Krista Miller, Liza Carmona, Jordan Levin, Valerie Berreiro, Shana Weler Cherry and Sandra Portal-Andreu.

Garcia says that there is so much knowledge in the local Miami community that the LALA residency focuses on local artists. Currently, there are six over a two year period who share their ideas and thoughts and serve as "sounding boards" for each other as they create their works.

Both Andree and Portal-Andreu agree that their works have been impacted by the discussions and feedback they have received from the other selected artists.

Garcia says, âThe idea is that the artists are there to be able to create in community. Theyâre making their own work, but theyâre doing so in a way that they are subtly influencing each other and creating a support system amongst themselves.â

Live Arts Miami started an initiative in 2019 called EcoCultura, which looked at the intersection between arts and climate change and, as Garcia says, how the arts could be used as a tool to plant seeds for action. For this round of LALA, EcoCultura has been the inspiring force to unite the works of each artist.

âThis residency happened in the middle of COVID,â Garcia says. âThese works have been influenced by all of the crises that are currently happening.â 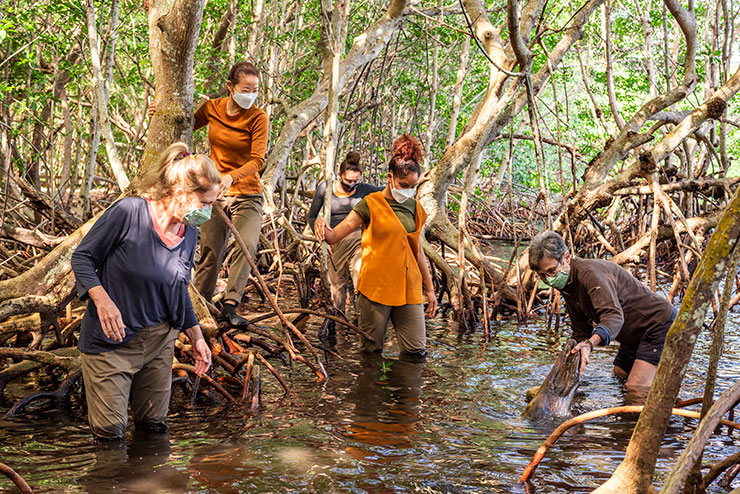 Because dance studios were closed during COVID-19, Dale Andree and dancers went to the mangroves.

Andree is a local choreographer and dancer whose explains that her works respond to the environment. She is the founder and director of National Water Dance as well as a John S. and James L. Knight Foundationâs Knight Arts Challenge recipient.

Andree says, âFor me, the joy of dancing lies in the beauty of discovery that evolves through deep self-exploration and expansive collaboration.â

Andreeâs work, âSuch Rooted Thingsâ was started when she began viewing climate change through a generational lens. Initially, Andree worked with her daughter, Thryn Saxon, to explore themes of intergenerational connection in relation to climate change. They are working for the first time as a "mother and daughterâ collaboration." Saxon is also performing a duet with her dance partner, Brad Beakes.

Through the LALA process, and because of the pandemic, Andree created numerous videos around the city in endangered areas. These videos have now become a part of the expanded larger performance. 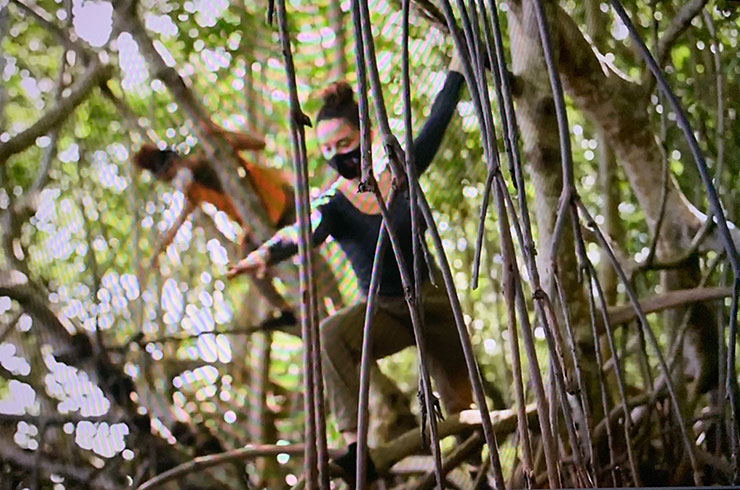 Because dance studios were closed, Andreeâs backyard became the rehearsal space during the week and on Saturdays, the dancers went to the mangroves.

Andree says, âOnce we started working in the mangroves, we just knew that that was the core of the piece. The idea of the mangroves holding the coastline, the rootedness. You can so easily see new life come up as old ones die.â

Working in the mangroves was not an easy process. Bug spray was a necessity and walking in questionable water was pervasive. The dancers were fearless and never complained. Andree says they were impacted in ways that they didnât even realize in the moment.

âI can see it in the way the dancers move in the film, that continual interaction with the space. The clarity of walking on the mangroves, the sensitivity in each step. One particular time there was this great white heron. When the dancers entered the space, he didnât move.â Andree took a deep breath. â Oh my gosh,â she says, âthis is the place of understanding.â

The performance at the Palm Terrace will be a series of live duets and groups, projections and original music. The open outdoor setting against the water inspires the feeling of space and vastness, with projections occurring on âsailsâ as the dance occurs.

In conjunction with the performances, PAMM will be showing a film that Andree created with videographer, Mateo Zapata Serna and with music by Kendall Simpson. Drawing from interviews with ten adult women from different backgrounds, ages, and ethnicities from across Miami-Dade County, Andree spoke with mothers, daughters, and grandmothers to see how women embrace the world at different stages of life.

The EcoCultura inspired LALA performance opens with Sandra Portal-Andreuâs work entitled âCirca/MIAâ. Creator, dancer and innovator, Portal-Andreu is the Miami Director & Southeast Regional Director of Impact for Project Art, an organization to empower youth, emerging artists, and communities through partnerships with public libraries in nine cities from coast to coast. She is inspired by the voices of youth.

As a first-time participant in the LALA program, Portal-Andreu says, âI have really loved this format. Itâs been great to have the time to create and I feel that my project has really evolved and changed over the time - even though we were working through a very interesting time,â she says. âI think I looked a little more deeply at choices. There was a sharing of ideas that I really appreciated,â she says. âWe all learned from each other and I think we all got something from the experience as well.â

Very methodical, as a choreographer, Portal-Andreu had ideas of where she wanted to do her performance. She also had a strong idea of what she wanted to create and how. Her original concept in 2019 was to create a film with a live performance element that reacted to the projection.

When COVID happened, all of the performance spaces were closed and live performance was very uncertain, she ways.

âI have to say, the performance part of it really frustrated me. Every space was just so challenging,â she says.

For the first half of her LALA residency, it was just about the film.

When Andree and Portal-Andreu were chatting, they started seeing parallels in their respective projects.

Portal-Andreu says, âDale (Andree), who already had PAMM solidified, was creating a piece exploring the relationship between land and the body, this generational passing on and my project was somewhat similar - except that Iâm working with younger voices. She was doing a site visit and I went to the park with her - and I see this giant head. I said to myself âOK.â Something was calling to me.â

The giant head sculpture by Jaume Plensa looked like a childâs head, it is looking out to the ocean and is titled âLooking Into My Dreams, Awilda.â Portal-Andreu had found the perfect setting for her performance.

She said, âThis is where it needs to be. Now I have a place to start and everything just moved so fast for me from there.â

Starting at a personal level, the inspiration for the film came from simple conversations that Portal-Andreu had with her own kids about climate change, what it means to them, and how do they feel about it.

Portal-Andreu wondered if location determined perception and reached out to a wide variety of demographics. She found that kids who lived near the ocean talked about sea level rise. Kids who lived farther south and west talked about heat, drought and fire.

She not only interviewed students, but she had them create artwork based on their conversation and is having the art animated by Brenna Verner of Miami Dade College's "Magic" Animation Department, as a part of the film.

Now that the Palm Terrace is identified as her performance space, Portal-Andreu feels there is a very important site-specific element to the performance. The dancers are working with the stairs, they move around the magnificent head sculpture and the dancers travel along the sidewalk where the bay will become the living backdrop.

In the live performance, there will also be projections of the childrensâ interviews accompanied by the live element of Afrobeta music giving a theatrical multi-media effect.

âThis is very much a community based, community engaged, community informed piece. It has taken us all to make it work. I think I am the community organizer.â Portal-Andreu says.

With this performance, both Andree and Portal-Andreu are sending a message. Andree says, âThe more I do this work, I realize, weâre really not saving the environment, weâre saving ourselves. We are the environment.â

Both artists have created short films, that live alongside their performances, which will be available for viewing inside PAMM from May 13-16. Entry fee required. The films will also be available for viewing on mobile device via QR code at the event. Also, pack a picnic, and explore an outdoor trail of artworks before or after the show as part of PAMMâs Fresh Air | Fresh Artâ ¢ experience in Maurice A. FerrÃ© Park.