Leaden Lark: 'Knives Out' Strikes Out

The invitations have been sent out, and moviegoers are RSVP-ing. The sets are done up to the nines with eye-popping flair. The star talent on display showcases one casting coup after another. "Knives Out," writer-director Rian Johnson's aggressively playful murder mystery, is taking a page out of the Steven Soderbergh playbook, aiming for sly sleight of hand while adding timely social commentary. But despite an infectious cast, and as jovially as it embraces a cheeky bonhomie, the movie eventually becomes a chore to sit through. I can't remember the last time a filmmaker put so much effort into making his work feel effortless. 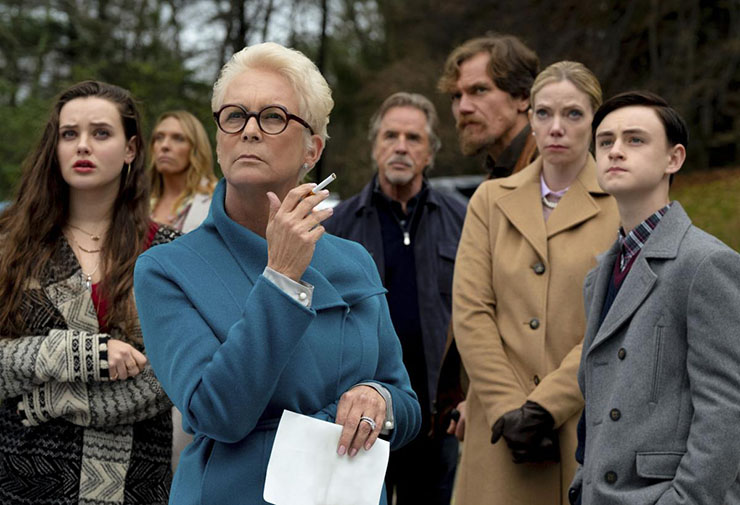 But try as it might, this Lionsgate release, strategically timed to rope in Thanksgiving audiences, can't conceal the strain in untangling its central enigma: who is responsible for the death of best-selling mystery novelist Harlan Thrombey? The acclaimed, prolific author (Christopher Plummer) had amassed a publishing empire, a vast fortune and a dysfunctional array of money-grubbing children, grandchildren and in-laws. The day after his 85th birthday party, his body was found at his remote Victorian mansion with an apparent self-inflicted knife wound to the neck.

Enter Southern private eye Benoit Blanc, played with unctuous charm by Daniel Craig. The detective, dubbed "the last of the gentlemen sleuths" and renowned for solving tough cases, intuits malfeasance most foul. The cops, Lieutenant Elliott (deadpan LaKeith Stanfield) and Trooper Wagner (droll Noah Segan), are going through the motions, interviewing every family member to make sure to dot every "i" and cross every "t." As far as they're concerned, this seems like an open-and-shut case. 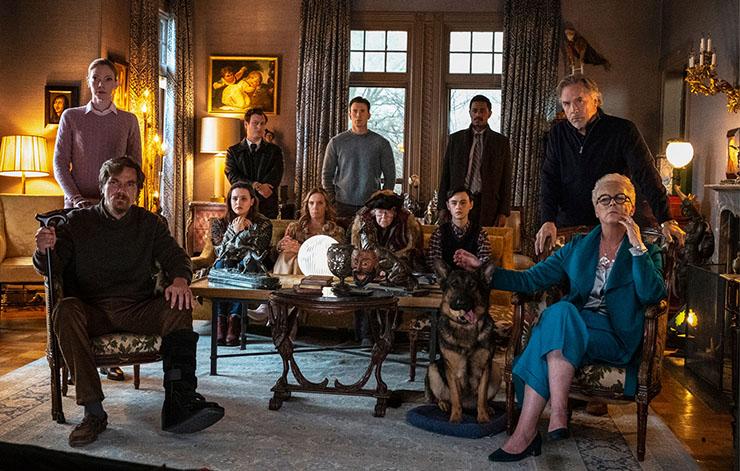 Those interviews end up being the most enjoyable part of "Knives Out." Johnson neatly and unobtrusively introduces each member of the Thrombey clan, a colorful gallery of entitled one-dimensional snobs, each with their own ax to grind and their own reasons for benefitting from their patriarch's passing. But who is the culprit? Is it his oldest daughter Linda (Jamie Lee Curtis), her husband Richard (Don Johnson), or their bratty son Ransom (Chris Evans)? What about Joni (Toni Collette), the widow of his deceased son, Neil, or her college-age daughter Meg (Katherine Langford)? And we can't rule out Harlan's younger son, Walt (Michael Shannon), who runs his publishing company, or his alt-right son Jacob ("The Book of Henry's" Jaeden Martell).

Standing in a corner ad trying to keep put of the way is Harlan's nurse, Marta (Ana de Armas), our audience surrogate and, despite what the trailers and TV ads might have you believe, the film's actual protagonist. She is clearly well-liked by the family, and they keep reassuring her that she will be taken care of, even as they seem curiously interested in the revelation that she was the last person to see Harlan alive. De Armas, marvelous as Ryan Gosling's virtual girlfriend in "Blade Runner 2049," has these expressive, incandescent eyes, and she knows how to maximize them, even though her performance appears to be a better fit to a more serious film than "Knives Out." You can't blame the Cuban actress for playing the role straight, considering the gravity of her dilemma, but she's operating at a different register than the rest of the cast. Still, the strategy works. For a while. 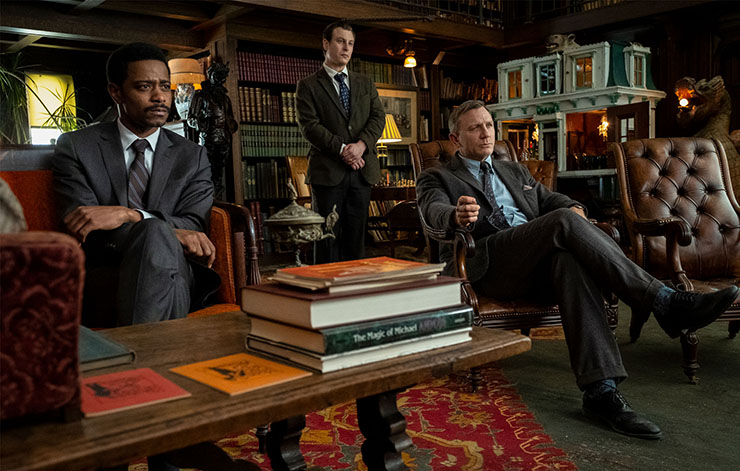 As Marta, who reluctantly becomes Watson to Blanc's Holmes, becomes more and more involved in the investigation, Johnson starts tossing clues, red herrings and family skeletons our way. The a-ha moments should make the story more intriguing, but they end up having the opposite effect. What starts out as a nimble contemporary twist on Agatha Christie becomes increasingly labored and unwieldy, despite some dexterous cutting by editor Bob Ducsay and ornate production design by David Crank.

Even more disappointing, the Thrombeys largely recede into the background. They morph into a glorified Greek chorus fueled by old-money outrage. Langford and Martell, in particular, are wasted in underwritten roles. Johnson replaces a more committed interaction between these characters with a none-too-subtle portrayal of anti-immigration sentiment. Marta, you see, is a legal immigrant from Latin America. (Each Thrombey family member cites a different country of origin for her. Tee hee!) But not everyone in her family is documented, which grows into a significant narrative wrinkle and ignites the movie's clarion call for acceptance. There's a time and place for cinema to tackle that political divide. A fluffy yet heavy-handed whodunit is hardly the most ideal engine for such a sermon. And, for all his noble intentions, Johnson's depiction of Marta and her loved ones still feels like a white dude's flat-footed stab at writing Latinx characters. 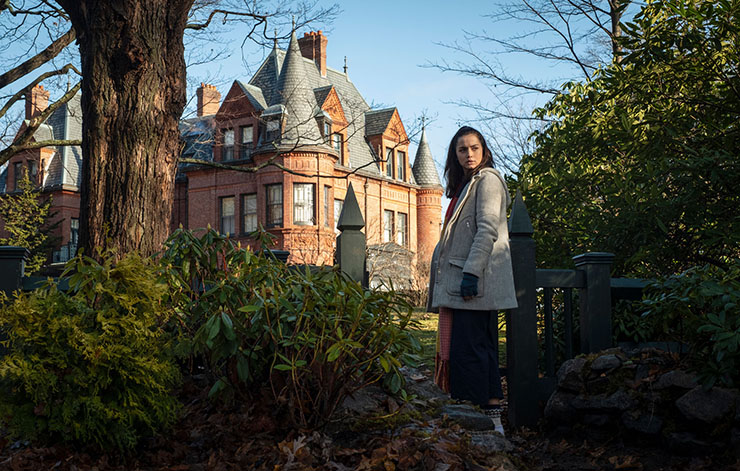 It's a step backwards for the "Brick" and "Looper" director, who displayed genuine growth when he took over the reins of the Skywalker saga in the polarizing "The Last Jedi." After taking Death Star-sized risks on that "Star Wars" chapter, this latest effort shows him returning to his comfort zone, with mostly diminishing returns. In terms of tone, "Knives Out" most closely resembles "The Brothers Bloom," his 2008 con-artist romantic caper, starring Adrien Brody, Mark Ruffalo and Rachel Weisz. Both films share an overeagerness to please that's sometimes at odds with the material.

"Knives Out" shows Johnson is still trying too hard to earn the viewers' affection. He is hellbent on giving audiences what they want, then works overtime to keep giving it to them until that exit door sure starts looking enticing. You notice the seams holding this nothingburger of a mystery together. And just when you're hoping for one last big reveal, it settles for an astonishingly pedestrian resolution. There's no rabbit being pulled out of this hat, just a self-satisfied would-be payoff. You feel this convoluted concotion evaporating before your eyes. A leaden lark might be what holiday audiences may be seeking this season, but this critic pleads guilty to wanting a little less hamfisted levity and a little more substance. 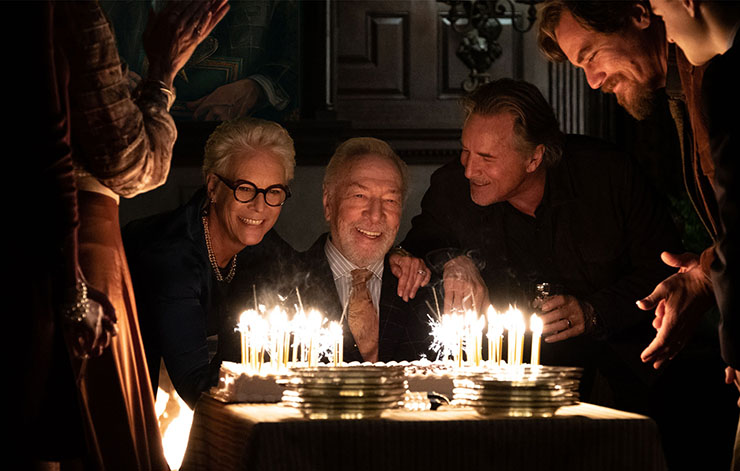 Rian Johnson's "Knives Out" is now showing in wide release across South Florida.