LEFT: The cast of Actors' Playhouse at the Miracle Theatre's production of "Million Dollar Quartet Christmas" performs during a scene. RIGHT: Jerry Lee Lewis (Dominique Scott) is at home on the piano. Here, he performs while Johnny Cash (Sky Seals) looks on. (Photos by Alberto Romeu)

If your eyes light up like a Christmas tree at such a prospect, then a ticket to a performance of "Million Dollar Quartet Christmas" should be the next item on your holiday shopping list.

While it is too early to tell whether mountings of this high-energy and invigorating new musical sequel of sorts will become as regular during the holidays as "A Christmas Carol," it seemed to be a hit with patrons at Actors' Playhouse at the Miracle Theatre. That is where an electric professional production of "Million Dollar Quartet Christmas" runs through Jan. 1 in the company's 300-seat upstairs theater.

If you are a music aficionado, you might be familiar with the Tony Award-nominated Broadway musical, "Million Dollar Quartet." It dramatizes a real-life historic impromptu jam session between rock stars Presley, Perkins, Cash, and Lewis. The session took place at Sun Records Studio in Memphis, Tenn. on Dec. 4, 1956. The event, which brought the four icons together for the first and only time, happened more than 65 years ago at the studio where they got their start.

Like Actors' Playhouse's production of the original show, the sequel features skillful and energetic musicians who win us over with their charm, charisma, and talent. Cast members perform such well-known songs as "Don't Be Cruel," "Ring of Fire," "Blue Christmas," "Silent Night," and "I'll Be Home for Christmas." However, like the original show, "Million Dollar Quartet Christmas" features a noodle-thin plot and awkward exposition. And there isn't much new material in the sequel. It is basically "Million Dollar Quartet" with Christmas songs.

In "Quartet Christmas," the guys perform holiday songs and talk about Christmases past, present, and future. However, you will not find any ghosts wandering around Sun Studios. Unlike "A Christmas Carol" "Million Dollar Quartet Christmas" is a realistic show populated by real people who actually lived. And while they were famous, librettist Colin Escott (who also penned the original show's book) does not glorify the men. Instead, they come across as flesh and blood human beings with virtues and faults.

In the original show and the sequel, Sun Records Studio owner Sam Phillips struggles over the fact that the musicians he groomed to stardom have left him â or are about to leave him for recording contracts at bigger labels.

In "Quartet Christmas," we learn more about the personal and professional demands that Presley, Cash, and Perkins were experiencing at the time. Also, the sequel fleshes out Presley's relationship with his girlfriend, Dyanne, as well as Cash's relationship with June Carter.

While "Quartet Christmas" includes details about the characters' lives, music is front and center. Specifically, the stars perform more than 20 famous songs and holiday classics. Some songs receive rock arrangements, while others are appropriately quieter. 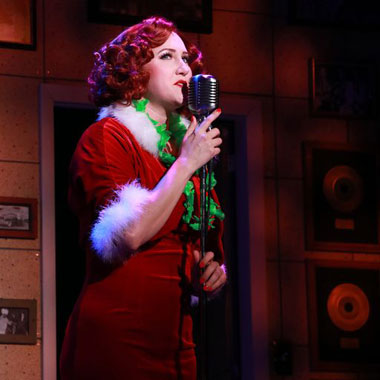 Elvis Presley's girlfriend, Dyanne (Lindsey Corey) shows she is not afraid to get up in front of everyone and perform. (Photo by Alberto Romeu.)

The performers shine. Sky Seals ably conveys an understated polish as Cash, Eddie Clendening, slicked back hair and all, brings a cool, calm air to Presley, Jeremy Sevelovitz imbues Perkins with a country charm and fervor, and there is nothing tame about Scott's unabashedly wild, wide-eyed Lewis. In fact, Lewis won the "Best Supporting Actor in a Musical" Carbonell Award for his performance in 2016 as Lewis.

Other cast standouts include Gregg Weiner as an intense, proud, and devoted Phillips, and Lindsey Corey as Presley's girlfriend. The latter performer radiates sultriness, seduction, and showmanship that makes you believe that her character is one of the guys.

Arisco, who carefully directs the production, knows how to milk a comic moment for its greatest effect and make heated moments feel palpable without feeling forced.

Sound designer Alex "BT" Bonilla does a good job ensuring that the volume is just right. Specifically, the sound is vibrant without being too loud. While hearing the performers is never a problem, it can be difficult to understand them. That is mainly because the performers speak in a Southern dialect. For instance, Phillips says, "Hey, look, I bin tetchier than I oughta bin."

Like the original show, "Million Dollar Quartet Christmas" provides jolts of invigoration sorely needed today, when listening to the news can wear you down. Also, if you are not yet in the holiday spirit, this show will surely fix that.

"Million Dollar Quartet Christmas" at Actors' Playhouse in the Balcony Theatre at the Miracle Theatre, 280 Miracle Mile, Coral Gables, 8 p.m. Wednesday-Saturday, 3 p.m. Sunday, through Jan. 1.Tickets are $40 to $125 (seniors 65 and over get 10 percent off weekdays only; students 25 and under with valid student ID pay $15 for a rush ticket available 15 minutes before a weekday performance)Call 305-444-9293 or go to www.actorsplayhouse.org