Creating Fireworks Wherever She Goes 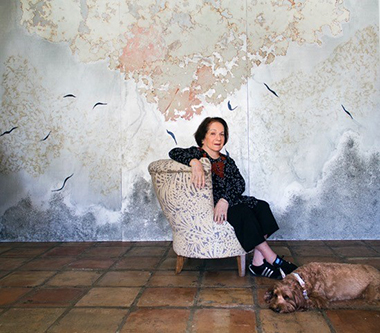 As part of this year's Art Basel, Miami-based artist Mira (pronounced My-ra) Lehr, 85, will debut her new large-scale installation of 200-plus aerial sculptures in a solo exhibition entitled, "Mira Lehr: A Walk in the Garden," at the Jewish Museum of Florida-FIU.

In addition to the ceiling sculptures, two 7-feet x 12-feet triptychs, and nine major paintings will be created for this installation. Viewers will feel as if they are walking through an aerial garden of luminous, reflecting sculptures, says Susan Gladstone, executive director of the Jewish Museum. "Mira has had a long and distinguished career. As someone who has long-admired her and her work, we're thrilled to have her artwork on display at the museum."

"She is still innovative, modern and quite brilliant," says Gladstone. 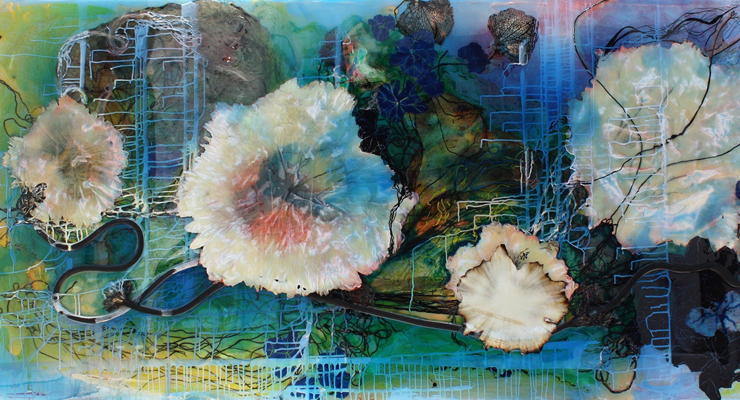 Combining her Judaism and her love of nature, Lehr says, "These sculptures will be based on seven kinds of plants mentioned in the Torah. It will be a holy garden, that takes people out of the actual world and transports them onto a spiritual plane."

Best known as an eco-artist and for her beautiful, ethereal Japanese-like Dreamscapes, Lehr has been painting since she can remember. 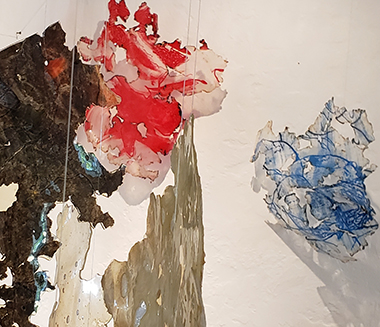 "Maybe I was Japanese in a former life," jokes Lehr by telephone from her home studio in Miami where she works. "I've always had an affinity for the Japanese aesthetic â the empty spaces are as telling as the filled spaces. (This is a reference to the Japanese concept of "Ma,"- the void between all things and the celebration of the negative space.)

Fascinated with the juxtaposition of creation and destruction, Lehr is known for her exceptional use of gunpowder to ignite her work and singe the layers of Japanese rice paper she uses along with mixed media of wood block, resin, acrylics and inks.

"The neighbors wonder why there's so much smoke in the backyard," Lehr says with a laugh.

She talks about her process of employing gunpowder in a YouTube video:

"Let it go too far and you've destroyed it," she says. "Put it together in some terrific way; you've created."

"It's kind of exciting," she says. "My work was always very beautiful â nature-based images â very serene. But now, with everything going on in the world, I felt it needed a little more edginess to it, so I started to play with gunpowder and burn everything." 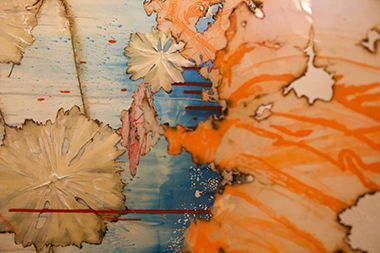 "And it's an amazing process because it's all about chance," she continues. "You can control a little bit and the rest you work with. After you've burned and everything is chaotic, you restructure it and make another universe. It gives it that sense of destruction and creation together, which is what I think nature is all about."

She noted that the only other artist she knows working with gunpowder is Chinese artist, Cai Guo-Qiang, who created the firework extravaganza at the 2008 Beijing Olympics.

"The process is a narrative about diminishing boundaries," explains Lehr. "Everything flows into everything else. It oscillates. The boundaries are blurred as in real life. You're an alchemist, making a new universe from all these processes."

Goldstein says she was taken with Lehr's fantastical representations of nature and asked her to create the aerial, natural floral shapes to suspend from the ceiling, creating the effect of a hanging garden.

"This is absolutely a site-specific installation," says Goldstein. "Lehr created these pieces specifically for our space creating an immersive experience for the viewer."

"We want to make museums matter," she says. "Seeing art on your computer is not the same as venturing in to the museum and having a real-life experience. I knew instinctively that Lehr's vision of nature-inspired art was the right concept for our venue, an old synagogue."

Born in New York, but in her sixth decade of living and working in Miami, Lehr admires Matisse and Rembrandt and studied painting with Robert Motherwell, Roberto Juarez, James Brooks and James and Nieves Billmyer (long-time students of Hans Hofmann).

A formative highlight of her career came in the early 1960s, when living in New York, she met and hung out with many of the abstract expressionists and became an original participant in Buckminster Fuller's the first World Game Scenario Project at the New York Studio School. (The project was an antidote to War Games.) 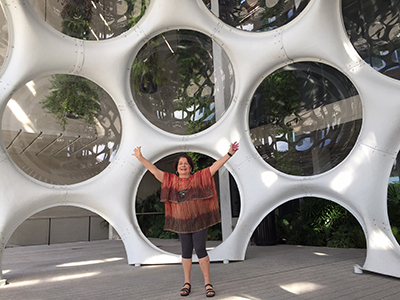 Mira in front of Buckminster Fuller's Fly Dome In front of PAMM Museum, 2014

Ahead of its time, the goal of the project was to "Make the world work, for 100 percent of humanity, in the shortest possible time, through spontaneous cooperation, without ecological offense or the disadvantage of anyone."

Lehr took this philosophy to heart and still works to sustain the environment.

Currently, she is creating seahorse sanctuaries, designed to give seahorses a protected environment in which to grow. Their natural habitats are threatened due to dredging on the beaches in Miami.

Her work is on display at the Mount Sinai Medical Center, Skolnick Surgical Tower and Hildebrandt Emergency Center, the Vizcaya Museum and Gardens and the Fairchild Tropical Botanic Gardens, all in Miami, and her painting Cosmic Energy hangs in the lobby of the Evelyn Lauder Breast Center of the Sloan Kettering Memorial Center in New York. 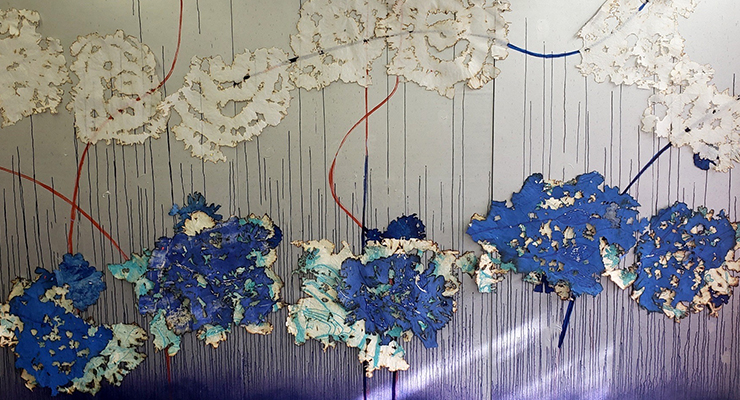 From 2008-2010, she was chosen by the Art in Embassies program to exhibit her work in the American Embassy in Sofia, Bulgaria.

As she describes her work for that program, "The tensions balanced between the abstract and the illusion, the hidden and the revealed, the hard edged and the soft focus all add to the mystery and the resonance of the work."

The only thing the artist allows in her space while she's working is her smart device Alexa, which she says, keeps her company on occasion. But, she stays, she'd rather stay focused without outside stimuli. 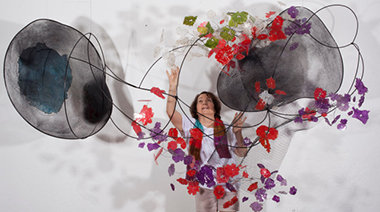 Over the years, she says her creations have come to her easier. "My work has become smoother and more consistent."

Lehr's community impact and influence on the art scene in Miami was felt as early as the 1960s when she cofounded the Continuum Gallery, one of the first women's co-op gallery spaces in the nation.

She recalls former Miami Herald art critic Helen Kohen, herself a major influence in putting Miami on the international art map, as crediting Lehr's contributions to bringing established artists to Miami and enlivening the art scene, which as Lehr admits was pretty arid at the time.

Dubbed "The Mistress of Light" by the late "60 Minutes" correspondent Morley Safer, Lehr, a mother and a grandmother has some advice for young artists.

"Never stop trying," she says. "If you believe in yourself, you can make an impact in the professional world as well as at home."