In his queer cinephile bible âThe Celluloid Closet,â Vito Russo excoriated William Friedkin for insisting the two gay-themed movies he directed one decade apart from each other were not gay films. The spin cycle was set to âerase,â as the prolific filmmaker refused to peddle his wares as pansy stuff. After all, man behind âThe Exorcistâ and âThe French Connectionâ didn't make movies for sissies.

What were the movies in question, you ask? One was âCruisingâ (1980), a police thriller starring Al Pacino as a New York cop who goes undercover to catch a serial killer targeting gay men in the city's Meatpacking District. The other was âThe Boys in the Bandâ (1970), a screen adaptation of Mart Crowley's seminal off-Broadway play, also set in the Big Apple, about a birthday party that takes a dark turn into introspection and emotional violence for a circle of friends. 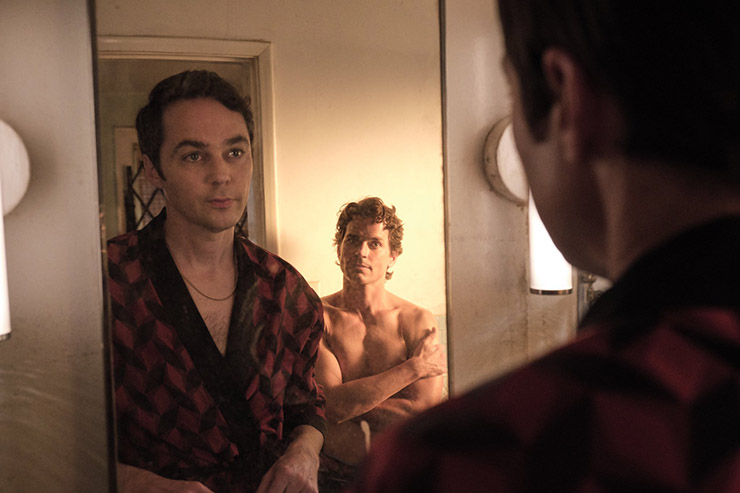 Both films have their defenders and detractors, but despite where one may fall on these movies' Kinsey scales, it's pretty evident that time has been kind to them, not only because they tackled subject matter that would not be fully embraced by the mainstream until decades later, but because they also resisted treating the characters' sexual orientation as a social issue. Whereas âCruisingâ used its butch S&M imagery to give a queer spin to the âpolicier,â âBoysâ used gay men's closets of shame and internalized homophobia as a window into their psyches. The cutting barbs fly fast and furious. So does the crippling self-loathing. 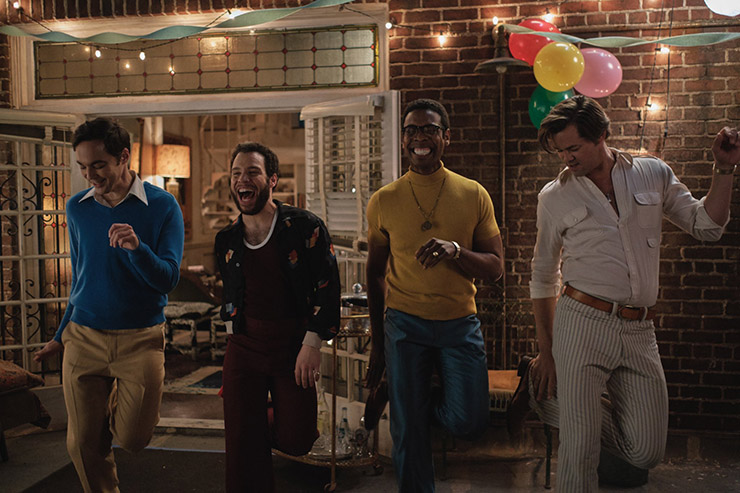 So what, then, to make of the slickly produced take on Crowley's blistering ensemble piece premiering on Netflix next week? Adapted from the 2018 Broadway revival headlined by Jim Parsons, Matt Bomer and Zachary Quinto, which opened within two weeks of the play's 50th anniversary, the film bears all the earmarks from the ubiquitous Ryan Murphy, showrunner extraordinaire, credited here as one of the film's producers. As the movie opened, my heart sank: widescreen vistas of New York City circa 1968 that feel as authentic as a computer game, a glimpse of the characters as they're getting ready for the big bash. âFeels way too wholesome,â I scribbled down, followed by âwhere's the grit?â

And why are all the men so pretty? The new âBoysâ reunites the entire cast from the revival, all of them openly gay, as the media coverage hammered home at the time, and proceeds to glam them up. Doll up Parsons even though his character, Michael, spends half the movie bemoaning his receding hairline? Check. Give viewers an eyeful of Bomer as his character, Michael's friend Donald, hops in the shower? Check. Make a big deal of birthday boy Harold's (Quinto) pockmarked face, even though the blemishes are pretty hard to make out? Check. This is very much the Hollywood version of Crowley's vision, but part of what gave his ensemble piece its galvanizing charge was the way it brought together good-looking men with those whose looks are more on the average side. That gets lost in the shuffle when all your players are ready for their close-up, Mr. DeMille.

Nononononono, my inner voice lamented. This can't be happening. âThe Whole Wide World Was Scrubbed Clean,â the title of Patrick D. Bell's scholarly paper on Disney animation, popped into my head. Despite some competent work from cinematographer Bill Pope, the look of this âBoys in the Bandâ might be in keeping with Netflix's âSqueegeedâ aesthetic, but it's an ill fit with the source material's blunt, rough-around-the-edges appeal. You guessed it: the new movie spares no expense in showing off Michael's Upper East Side apartment, complete with a balcony that gives Lois Lane's improbably plush pad in Richard Donner's âSupermanâ a run for its money. 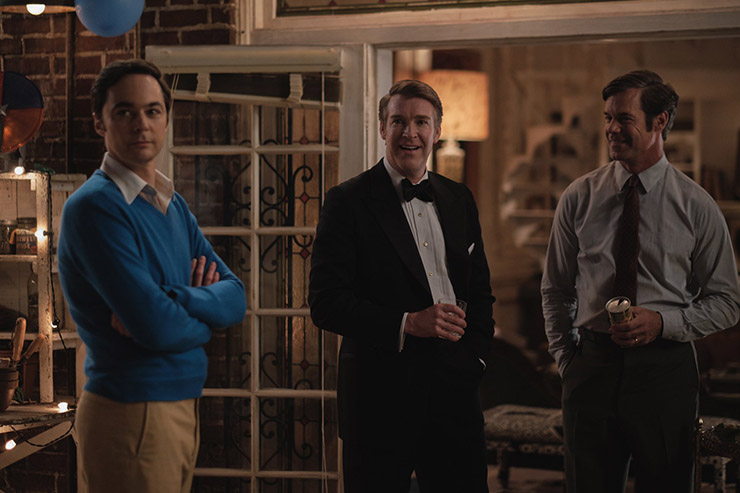 This is period dressup, plain and simple, in service of a retelling that doesn't like getting its hands dirty. Your ruthless reviewer started sharpening his knives.

And yet, this is still âThe Boys in the Band,â the movie equivalent of that plainspoken friend who will point out all your flaws because they hate themselves even more. It's that frenemy who loves you deep down, even as they're tearing you to shreds. Underneath the new film's manicured surfaces, director Joe Mantello is able to hold on to Crowley's unsparing dissection of his characters' neuroses and insecurities. In any case, it's hard to stay mad at a movie whose title was reportedly taken from a line in George Cukor's âA Star Is Born.â (Yes, the one starring Judy Garland.)

OK, so not everything makes a seamless transition from stage to screen. Mantello, who also directed the revival and back in the mid-1990s turned Terrence McNally's âLove! Valour! Compassion!â into a solid gay movie, attempts to open up the play but is unable to shake off a theatricality when it comes to portraying some of the characters.

Case in point: Larry (Andrew Rannells) and Hank (Tuc Watkins, whom you may recognize from the series âBeggars and Choosersâ and âDesperate Housewivesâ), who play a couple grappling with a relationship woe that flirts with stereotype: Larry spurns monogamy, which upsets Hank, a bisexual man who is separating from his wife. We accept the play's more dated elements, but Rannells and Watkins struggle to make their stage-friendly lines work as movie dialogue. You can see them A-C-T-I-N-G. 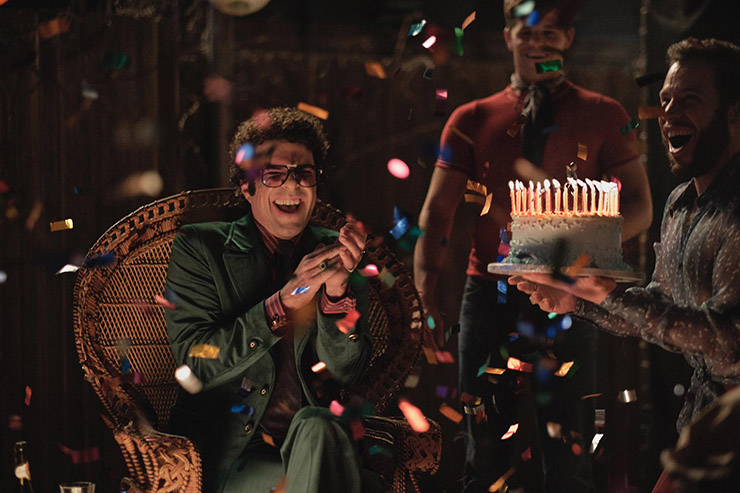 Working from a screenplay credited to Crowley (who died earlier this year) and âGleeâ alum Ned Martel, Mantello, who was by far the best thing about Murphy's misbegotten limited series âHollywood,â has chosen to retain the play's period-accurate use of racial epithets and other politically incorrect remarks, a commendable decision that nonetheless opens him up to Film Twitter's wrath. Still, that doesn't explain the movie's tendency to lump together the two characters who are played by minorities.

Emory (âCamp'sâ Robin de JesÃºs, the MVP here) and Bernard (Michael Benjamin Washington) are often depicted as victims: Emory's flamboyance is chastised by Alan (Brian Hutchison), Michael's college roommate/potential tortured closet case, and Bernard, the sole Black party guest, is too often defined by his longtime crush on a wealthy Anglo friend who lived in the house where his mother worked as a maid. There's a glaring disparity in agency between these characters and the rest.

But the aspect that gave the play its bite remains fairly intact. This âBoys in the Bandâ may be a clean freak, but its fingernails are still able to draw blood. As the night progresses and the alcohol flows, Michael, a lapsed Catholic with a drinking problem, decides it's time for everyone to play the Game of Life, and no, we're not talking about the heterocentric Milton Bradley board game.

Michael hands over his rotary phone to one guest at a time, and each has to call the person they've loved the most and let their feelings known. The party host is playing with fire, and he knows it. It's a blatant narrative device designed to unearth hidden truths, and it works like gangbusters. 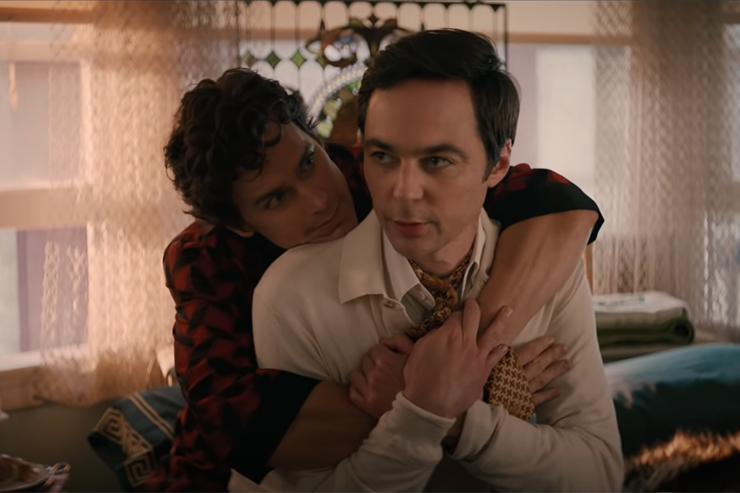 âBoysâ will be âBoys,â when all is said and done. Here it is, for your streaming pleasure: imperfect, needlessly dressed up, and still very much a powerhouse. It lacks the grainy spunk of Friedkin's film, but it works as an appealing queue addition for those who stand to benefit the most: Millennial and Gen Z gays who might not be as well-versed in their LGBTQ history as they should be and who could learn a lot from this time capsule of a time and place whose insights reverberate across the decades.

Joe Mantello's âThe Boys in the Bandâ drops on Netflix this coming Wednesday, Sept 30. Set up those virtual watch parties with your BFFs, or pour yourself some vino and take a trip down memory lane.