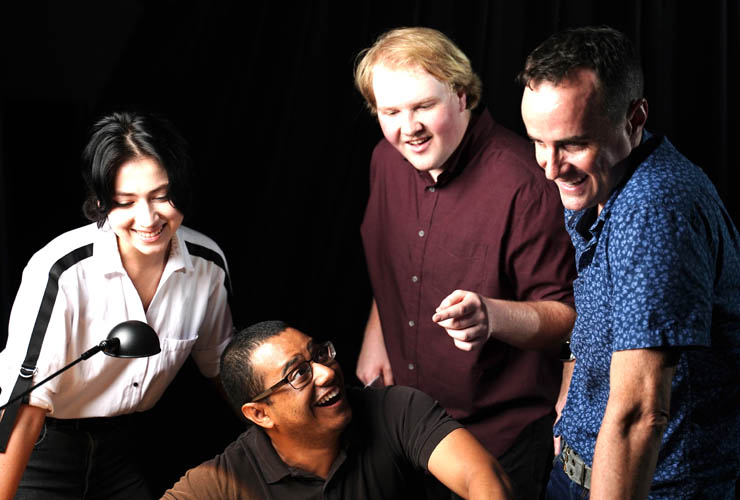 The Miami-performance cast include, from left, Natalie Veater as Susan, Jared Peroune at the piano, Owen Reynolds as Hunter, and Michael Stoddard as Jeff.

There's a new theatre troupe in town and they are staging their debut at the Coral Gables Art Cinema.

Miami Theatre Works, who are billing themselves as "a semi-professional theater company," will debut the cult musical, [title of show] (yes, that's the name of the show).

[title of show] follows the true story of creators and cast members Jeff Bowen, played in the Miami Theatre Works production by Michael Stoddard, who is also directing, and Hunter Bell (Owen Reynolds) alongside their female castmates Susan Blackwell (Natalie Veater) and Heidi Blickenstaff (Stephanie Staszak) as they all navigate the truth and insanity of building a musical from the ground up.

Stoddard is the creator and executive director of Miami Theatre Works (MTW). Currently the theater director at Palmer Trinity, a private college-prep school in Miami, he entered the South Florida theater scene five years ago and has on his resume creating and building one of Milwaukee's largest education theater programs, Community Theatre Works.

He said in 2019 that he began to seriously weigh the pros and cons of starting a small theater company.

âWe have mourned the loss of live theater for over a year due to COVID, and I am honored to be a small part of reconnecting our community with the power of the performing arts," says Stoddard, who added that he hopes this is the first of many shows to be presented by MTW.

Stoddard said he is joining forces with local businessman Bob Reynolds who is supporting the creation of the new theater company.

âWith a goal of presenting one production per summer, Miami Theatre Works will add opportunity to the many wonderful theater artists in the Miami area in a fresh and unique way," Reynolds said, who admits to being a lifelong fan and supporter of the arts and live theater. âI truly feel this community needs all the live performance theater it can get, and especially after having finally turned the corner on the pandemic. Weâre ready and so is Miami.â

Another idea behind Miami Theatre Works is that each summer, the company will present its productions in different performance spaces. This year [title of show] will be inside the venerable Coral Gables Art Cinema

Visit MTW's website or call 786-505-7903. Note: this show is not recommended for children due to adult language.