A robust crowd of 100 assembled at the Ancient Spanish Monastery in North Miami Beach on Thursday, Nov. 7 to hear SBCE serving up a program of Shostakovich, Puccini and Haydn. With its Gothic shaped arches, its beautiful space and excellent acoustics, the monastery's chapel made for a choice venue. 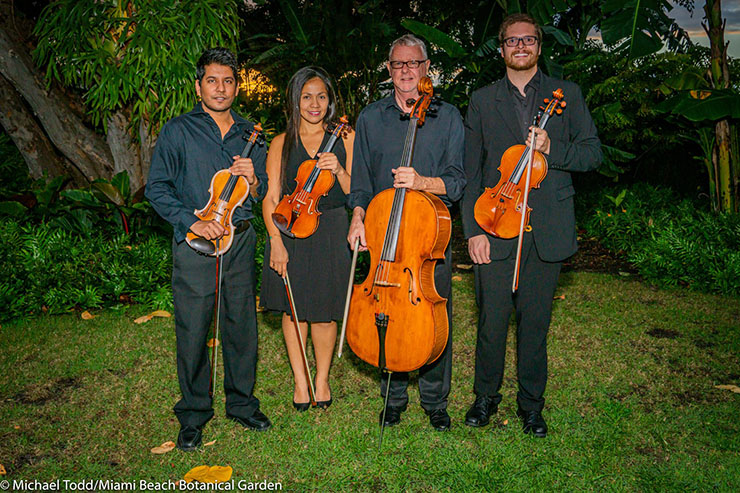 Covering the widest range of notes with the fewest voices is why the string quartet has endeared and endured ever since Haydn elevated the form to prominence, unwittingly challenging all the great composers to follow to compose one, or several, themselves. Mozart, Beethoven and DvorÃ¡k ran with the idiom, but a well celebrated operatic composer putting his hand to a string quartet?

Giacomo Puccini, the last of the great Italian operatic composers, wrote a handful of chamber works, the enduring elegy, I Crisantemi (The Chrysanthemums), written by him in a single night as a reaction to the death of his friend, the Duke of Aosta. It's a single continuous movement with two somber melodic ideas, referencing the flower of "mourning and heroism" in the Italian tradition.

The first melody bloomed with chromatic figures moving in contrary motion, the violin ascending above the melancholy figure from the cello. Sounding like an aria without lyrics, Seepersad beautifully wrought a second plaintive theme, repeating the melody in double octaves with Andrews. The expressive phrasing of the piece, imbued with plush texture and rich harmony, concluded with several satisfying chords from the quartet.

"Sardonic, witty, sarcastic and heartbreaking," is how Andrews's characterized Shostakovich's String Quartet No. 3 in F major. One might argue that these descriptives might be applied to most of Shostakovich's oeuvre. Forever playing a game of cat-and-mouse with the Soviet authorities, Shostakovich often composed at two levels: overtly representing state strictures to toe the party line while embedding his own critical and philosophical subtext that reflected his worldview.

Shostakovich composed No. 3 right after World War II ended. It is symphonic in scope and conveys his idiosyncratic musical personality, juxtaposing military-esque titles to the five movements while concurrently reflecting his pain and sarcastic and abrasive humor, steadily building the thematic material with in-step motivic elements.

Seepersad briskly opened with the first melody, a call and answer with the cello, melodic, harmonic and dissonant all at once, several concurrent tempo changes conveying a blithe ignorance of something ominous to come. All voices converged with the theme as the solo violin emerged unscathed.

Eakes's viola portended a sense of unrest in the second as Seepersad luxuriated with a prime figure, Andrews, with a supportive rich bottom, sustaining a series of long dissonant chords to end the rumblings of the passage.

The forces of war were unleashed in the third, a unison driving melody with a classic Soviet motif marched and grinded away, each player taking a turn with this aggressive movement. 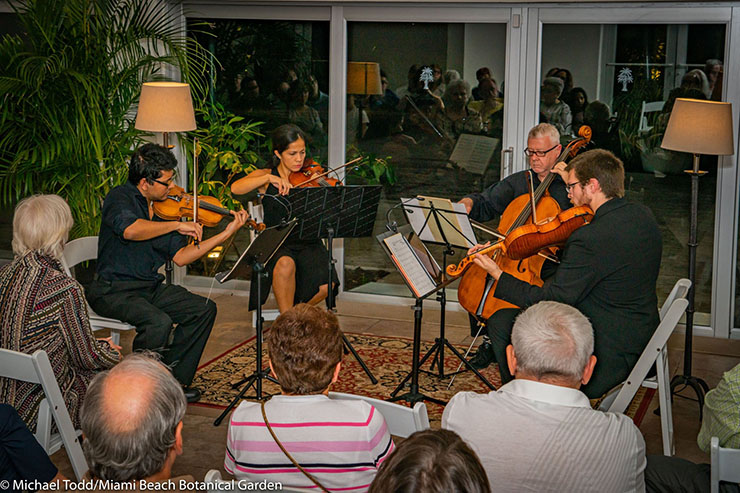 Perez skillfully set the somber tone for the Adagio, in memory of the dead, Eakes and Andrews following her in unison. The pensive and mysterious fourth, with its Harmonic and melodic language both accessible and opaque, was in sharp contrast to the harsh tone of the third, each player subtly eyeing each other to maintain cohesiveness. Andrews took a melancholy moment in the center, Eakes later intoned a sweet solo, and handed it back to Andrews who transitioned with a very stark rhythm into the fifth.

All four voices crested in a circular motion in the final movement (Shostakovich asking the eternal question: Why? And for what?), the low voices droning as Seepersad soared to the top for the nuanced finish.

Because Haydn was so isolated as a court musician in his comfortable digs at the court of EsterhÃ¡zy, he was "forced to become original." So, he invented the symphony and string quartet!

Not only was he a gifted composer, but he had a sense of humor as well. He wrote symphonies with "surprises" and string Quartets that told jokes.

Haydn's String Quartet in E major, Op. 33, nicknamed "The Joke," might actually be considered a violin concerto, featuring the first violin as virtuoso and joker.

Seepersad was up to the task, nuancing the tidy and pleasant first melody with aplomb, his runs crisp and effortless. A folksy melody presaged the smirky glissandos of the second, which Seepersad finessed with skillful quirkiness. Eakes brought on the slow third with a simple cello bass line accompaniment, Seepersad and Perez duetted, and the quartet rendered every ounce of harmony out of the measured melody. The Presto opened with a scamper, the players closely tracking each other, Seepersad adroitly navigating the joyful final motif.

Most string quartets end with a mad dash across the finish line. Not this one. after reaching what seemed to be the end of the piece, Seepersad and his comrades suddenly started playing the melody again, as if the movement was to continue, but abruptly stopped after one measureâ¦then started againâ¦stoppedâ¦started, stopped, started, stopped, started and finally stopped for good, the audience beginning to laugh at the funny conclusion as SBCE delivered the punchline.

Andrews said, "Our goal is to excite our listeners with the beauty and intimacy of chamber music and to leave them joyful and satisfied." The SBCE players did just that this evening.

Andrews pointed out that not only does SBCE render quartets from the masters, but has also performed contemporary new works including, for example, string quartets by south Florida Haitian-American composer Daniel Bernard Roumain and Jessie Montgomery.