They Ain't Chewing the Scenery, They Are The Scenery. And the Story...

They ain't chewing the scenery, they are the scenery... and every little spit and shine on the stage. They are the faultless cast of Zoetic's âThe Curious Incident of the Dog in the Night-Timeâ now playing at the Arsht Center.

Usually presented as a techno treat engulfing the autism of 15-year-old Christopher Boone, this version, directed by Stuart Meltzer, has the technical trickery replaced by the humorous and the human. 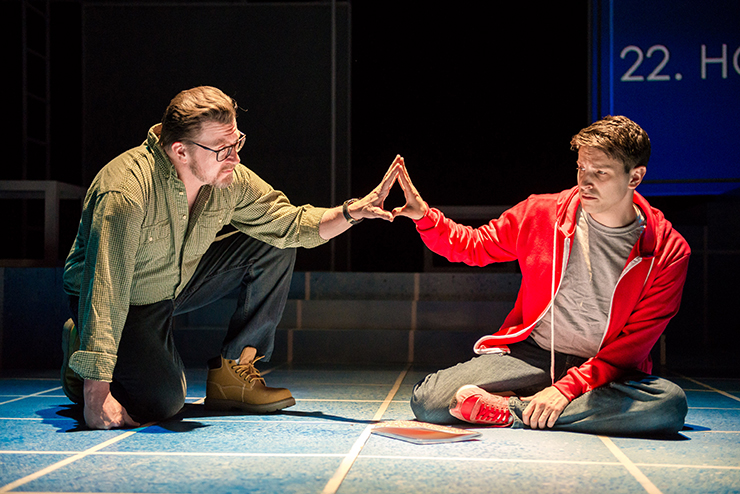 A beautiful German Shepherd lies dead, impaled by a garden fork. Sorrow. Christopher (Ryan Didato) stands staring. He is accused. And starts his journey to prove his autistic worth

In a performance worthy of any award. Didato opens Christopher wide, protesting his innocence, swearing to catch the killer of Wellington, the dog, surmounting his fears of school and travel. And of being touched by another.

Christopher's mother is missing and he must endure the loneliness of a home empty but for his devoted father, Ed, played by Stephen G. Anthony with seldom seen tenderness and love. He mourns for both his wife and child.

Niki Fridh is Judy, Christopher's mother, a cold woman torn between her own happiness and that of her son. Her emotional monologues stir the stoniest heart.

Ryan Didato and the cast. Photo by Justin Namon.

Gretchen Porro is the kindly Siobhan, Christopher's supportive teacher and confidante. She is also the part time narrator, reading from his writings.

And there are six more actors, Margery Lowe, Michael McKeever, Zack Myers, Rachel O'Hara, Barbara Sloan and Seth Trucks. They play a myriad of people. They open doors. And move furniture. And are furniture. And are machines. And are trees, and bushes, and are at times hilarious. And dead. And always fascinating.

Simon Stephens wrote the play, based on the novel by Mark Haddon.

Movement director Jeni Hacker has brought a ballet smoothness to the stage. No herky jerky here. But trembling and jostling and quirky wavering on instant call. 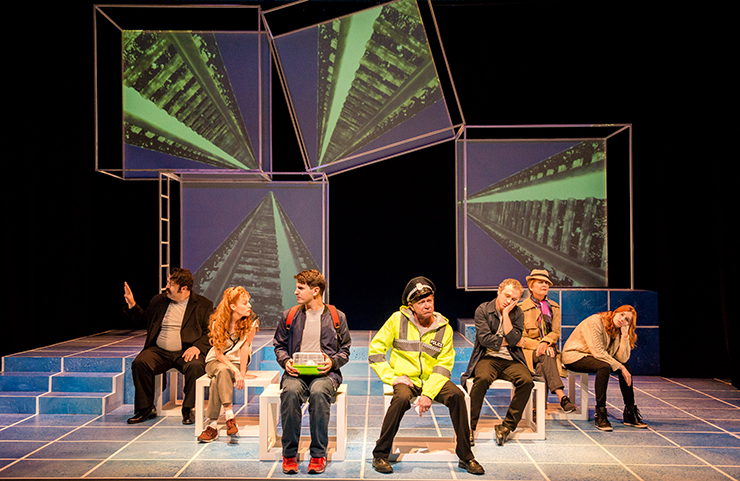 Ryan Didato and the cast. Photo by Justin Namon.

Michael McClain's brilliant blue and white three level set with four projection screens and a blue and white tiled floor is matched by Matt Corey's sound design and original composition. Rebecca Montera designed the lights and Natalie Taveras the many props. Marina Pareja designed the costumes. She did no favors for Niki Frihd.

âThe Curious Incident of the Dog in the Night-Timeâ is a long piece (almost as long as its title at over 2 1/2 hours) but it's endlessly fascinating, as much for its story telling as its acting, directing and production.

A co-production of Zoetic Stage and the Adrienne Arsht Center, it plays in the Carnival Studio Theater through Feb. 3. 1300 Biscayne Boulevard, Miami. 305-949-6722.Â www.arshtcenter.org