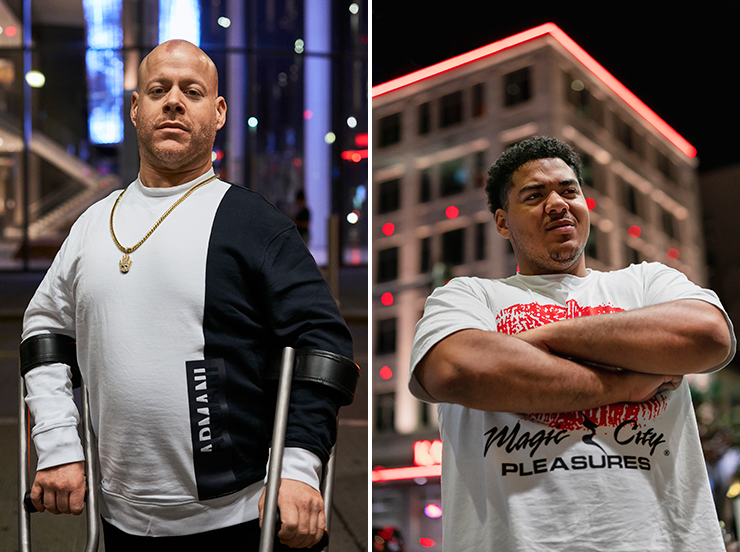 âYou shall not make gashes in your flesh for the dead, or incise any marks on yourselves: I am the Lordâ (Leviticus 19:28)

Having his âSteven Spielberg moment,â is how photographer Zachary Balber describes this present moment with his new photography exhibit "Tamim" (which roughly translate as âperfectâ in Hebrew). The exhibit opens Wednesday, Nov. 20 at the Jewish Museum of Florida-FIU with an opening reception at 7 p.m. The exhibit will be on display through March 2020.Â The photographs, some for the first time exhibited in full color, and others new and never shown before, will be part of Miami Art Week in December.

Looking to change the current conversation of what it means to be a Jew, Balber, 35,says traditional notions of Judaism are,â old school thought; still running on Windows 99.â

This current photography exhibit attempts to modernize the concept of what it means to be a Jew.

âZacharyâs beautiful quality photographs are an opportunity for us to take a well-known and accomplished, local artist and confront an issue that is of importance in todayâs world as tattooing becomes more mainstream and intersects with the Jewish community,â says Susan Gladstone, executive director of the museum. 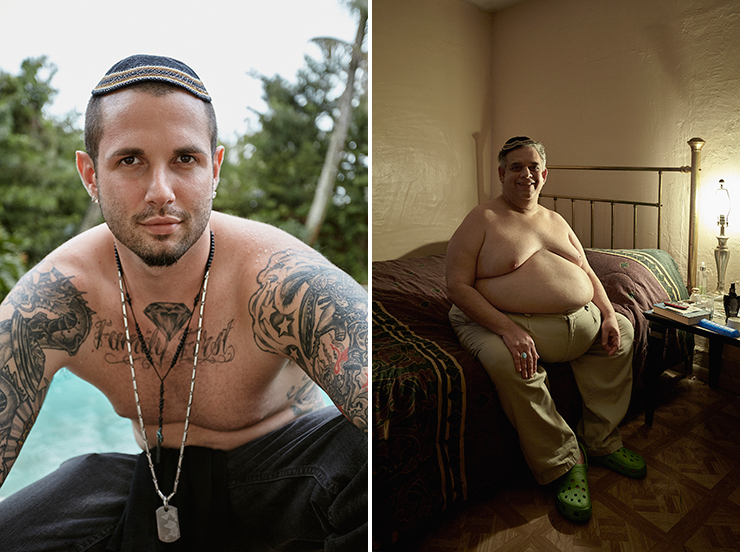 âMy goal is to open dialogue among the Jewish community,â says Gladstone who plans to bring in professors and lecturers to speak on these issues.

"Art is the battleground for humans to discuss issues of our time," says Balber, who grew up attending the Tree of Life Synagogue in Squirrel Hill, Pa., now known as the place where a gunman killed 11 people and injured 7 duringÂ  Shabbat services in Oct. 2018.

"Photography is the excuse to have the conversation we don't want to have," he says.

Balber studied photography under the photographic artist Maria Martinez CanÃ£s and graduated with his B.F.A. in Creative Photography with a minor in Art History; from University of Florida and New World School of the Arts.

In 2012, Balber had his first solo museum show at the Nerman Museum of Contemporary Art in Kansas City, Missouri.

âI make strong statements and strong art because I have a lot to say,â says Balber,who remembers falling in love with photography as a 13-year old bar-mitzvah boy at the Holocaust Museum in Israel. "I saw the power of photography and what it could do," he remembers.

As a child, going to synagogue and going through the motions of organized religion were more about appeasing his father, he says. He didn't understand the rituals and did not feel connected to a Higher Power.

It wasn't until he entered a recovery program in his late teens (where he met many of the subjects of the show) that he discovered what he says that a Higher Power and the idea of religion are inclusive. 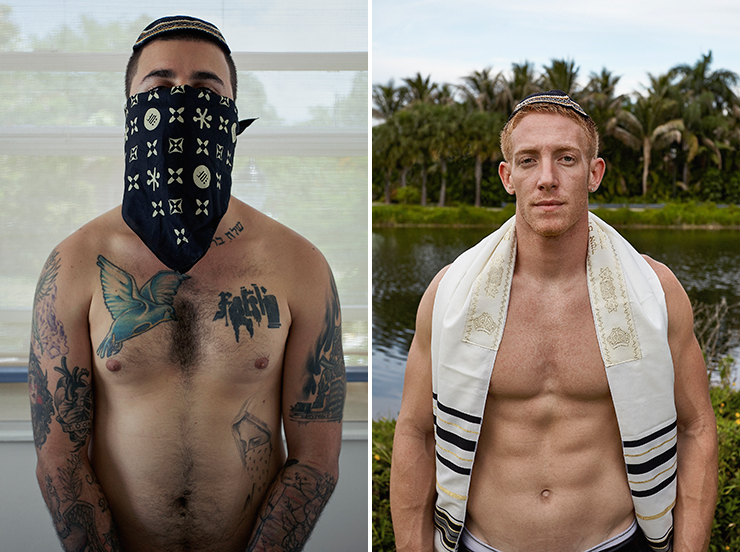 The subjects in his show, with their hardened exteriors and physiques covered in body art, are what Balber terms âthe lost tribe of outsider Jewish men.â

The result is a mutual odyssey of reconnecting to their culture, for both the subjects and the photographer. They share common, life challenges such as incarceration, addiction, recovery and rehabilitation. Like Balber, these men were also estranged from their culture and their families, and lived as outsiders to the Jewish community, many hiding or denying their Jewish identities.

To look beyond their exteriors and illuminate their humanity, Balber enlarges the images so viewers can make eye contact with each subject. 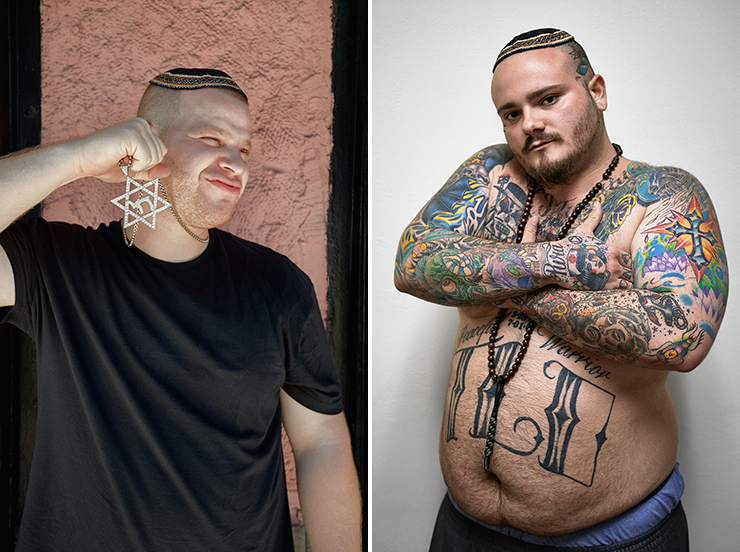 "When you gaze into their eyes, you can see the little Jewish boy is still there," says Balber, who paradoxically does not sport a single tattoo himself.

Many of the subjects were shot wearing Balberâs kippah; the one he wore when he was bar mitzvahed, and worn however the subjects of his portraits saw fit.

They are all standing tall and proud as Jews, something denied to Balber as a child, when he preferred to pass as Irish, thanks to his red hair.

One of the portraits is of his 19-year-old nephew, Aaron (Bud) Shefler, whose mother is African-American. 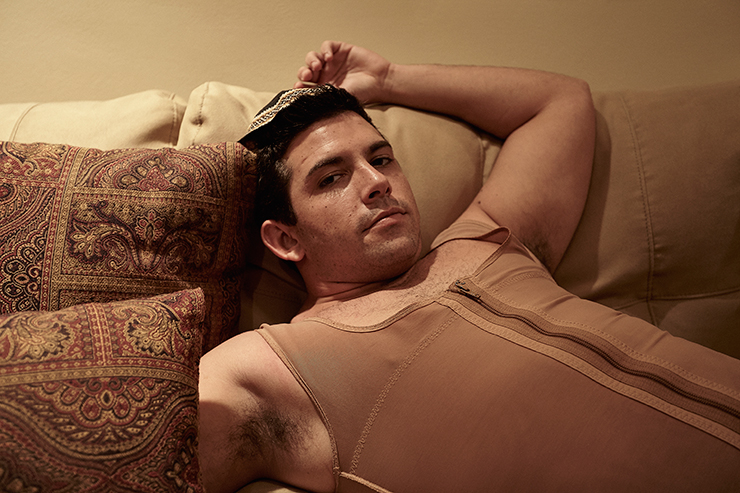 âI call him The Future Jew because genetically we know he is at least half Jewish,â Balber says.

Another âJewishâ subject is tattooed with a giant cross and an image of Jesus Christ.

"I am poking at puritanical notions of Jewishness,â says Balber. âWho is considered Jewish and why?â

He likens his photographs to those of Diane Arbusâs who was well known for her photographs of circus performers and those on the margins of society. Like Arbus, Balber sees his work as endeavoring to normalize disaffected groups in society.

âTo Diane Arbus, these people were not freaks, but her friends,â says Balber. âI feel the same way about my subjects.â

"I love to honor the regular man," says Balber, "to memorialize so-called "ugly," regular people. These guys can, and DO, belong. No one seems to be talking about these types of outsiders in this way. Whereas, before they hid their culture and heritage under extreme exterior facades such as tattoos and gang symbols, in these photographs they each stand proud and unashamed to be themselves, the meaning of Tamim.â

Jacqueline Goldstein, curator at the museum says, âThe subjects in Zacharyâs photographs have rediscovered their Jewish identity and through his work, he has reconnected with his Judaism as well.â

âItâs a two-fold discovery,â she says.

The exhibit opens Wednesday, Nov. 20 at the Jewish Museum of Florida-FIU, 301 Washington Ave., Miami Beach, Florida, 33139, with a reception at 7 p.m. The exhibit will be on display through March 2020.Â The photographs, some for the first time exhibited in full color, and others new and never shown before, will be part of Miami Art Week in December. Museum hours are Tuesday through Sunday from 10 a.m. to 5 p.m., closed Mondays and holidays. Admission is $12, adults; $8 senior/student; family price $24, Free admission on Saturday. Museum members, FIU students, faculty and staff, free admission. More information at www.jmof.fiu.edu.