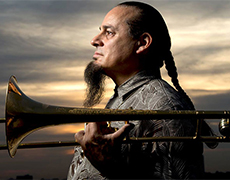 One of the worldâs preeminent jazz innovators, trombonist and seashellist Steve Turre swings into Keystone Korner Baltimore this August 5-7, 2022!

Steve Turre has consistently won both the Readersâ and Criticsâ polls in JazzTimes, Downbeat, and Jazziz for Best Trombone and for Best Miscellaneous Instrumentalist (shells). In addition to performing as a member of the Saturday Night Live Band since 1984, Turre leads several different ensembles. Turreâs quartet and quintet provide a setting based in tradition and stretching the limits conceptually and stylistically. In the Summer of 2000, Telarc released In The Spur of the Moment. This recording features Steve with three different quartets, each with a different and distinct master pianist: Ray Charles, Chucho Valdes, and Stephen Scott.

Steve Turre continually evolves as a musician and arranger. He has a strong command of all musical genres and when it comes to his distinct brand of jazz, he always keeps one foot in the past and one in the future. 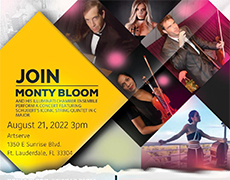 The Maecenas Society for the Arts presents: An Afternoon of Chamber Music, featuring: "The Illuminati" performing Schubert's String Quintet in C Major D. 956 and light popular selections August 21 at 3 PM at Artserve Fort Lauderdale, 1350 East Sunrise Blvd., Fort Lauderdale, FL 33304. Tickets from $35 at Eventbrite or call 954-515-7605. The String Quintet in C Major scored for two violins, a viola, and two cellos is widely considered among the greatest chamber works ever composed.

Be transported into the magical ethereal world created by Schubert's final chamber music masterpiece, the String Quintet in C Major, performed by the newly formed Illuminati Chamber Ensemble, featuring an elite international roster of musicians. The program will be rounded out with a few light popular selections. 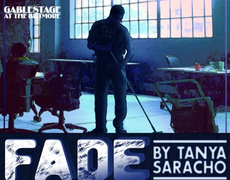 A witty dramatic comedy about class, integrity, and culture. Lucia is understandably nervous. Itâs day one at her first TV writing job. As a Hispanic novelist, she may actually be the âdiversity hireâ sheâs heard whispers about. Uncertain whether she can make a place for herself in cutthroat Hollywood, she feels less alone when she meets Abel, the Latino janitor. They form a bond and share stories, but it turns out that their friendship is not what Abel expects.

Beauty and The Beast 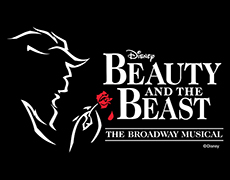 Area Stage Company (ASC) will present its new immersive version of Disneyâs âtale as old as timeâ classic, Beauty and The Beast, in August at the Adrienne Arsht Centerâs Carnival Studio Theatre.The beloved Broadway classic will display new twists to the showâs presentation, placing the audience directly in the heart of Beastâs enchanted castle. Audience members are invited to dine alongside Belle during âBe Our Guestâ and raise their mugs with Lefou in the tavern during âGaston,â providing a magical Disney experience like no other.

The production will launch on August 9th and run through August 28th. Evening and matinee show options are available. Student discounts are available.

For more information about the show or to buy tickets, visit website. 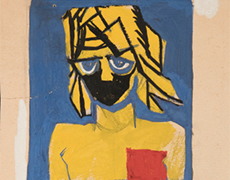 The years following the inception of perestroika policies and encompassing the collapse of the Soviet Union remarkably transformed Kyivâs art scene, successfully launching Ukrainian contemporary art as a truly global phenomenon. The calm waters of the culturally provincial capital of the Ukrainian Soviet Republic became radically stirred with new and daring art made publicly visible for the first time since the avant-garde period. This explosion of styles, rediscovered histories, and newly found freedoms blossoming against the background of the collapsing Soviet empire, the Chernobyl nuclear disaster of 1986, and increasing economic scarcity created an effect of baroque excess. As if in a crooked mirror, the overabundance in art styles and the limitless production of new meanings reflected the emptiness of the hollowed-out Communist ideology and late socialist realist art. This exhibition traces and documents the diverse artistic manifestations of these transitional and exhilarating years in Kyiv while providing some historical artworks for context.

All proceeds from the exhibition will go to relief efforts in Ukraine via Razom for Ukraine.

Painting in Excess: Kyivâs Art Revival, 1985-1993. Organized by Olena Martynyuk, PhD, Rutgers University, Guest Research Curator, with assistance from Julia Tulovsky, PhD, Curator of Russian and Soviet Nonconformist Art at the Zimmerli Art Museum. The exhibition was made possible by the Avenir Foundation Endowment Fund and the Dodge Charitable TrustâNancy Ruyle Dodge, Trustee, with the assistance of the Abramovych Foundation and Tymofieiev Foundation and with the additional support by the Ukrainian Institute in Kyiv. Its presentation at the Coral Gables Museum is sponsored by a generous grant from The John S. and James L. Knight Foundation with additional support from Allen & June Morris, Thesis Hotel Miami, and Carol & Vincent Damian.