Miamiâs Wynwood area has managed to elevate itself from seedy backwater to worldwide prominence with nary a blade of grass, water vista, gasp-worthy panoramic view nor buildings worthy of architectural thrill-seeking. These facts are responsible for luring artists and galleries because of, not in spite of, its lack of charm. Large inexpensive empty warehouse real estate coupled with a central location added to Wynwoodâs clawing up the social ladder, now warranting its own prestigeous Art Wynwood fair. 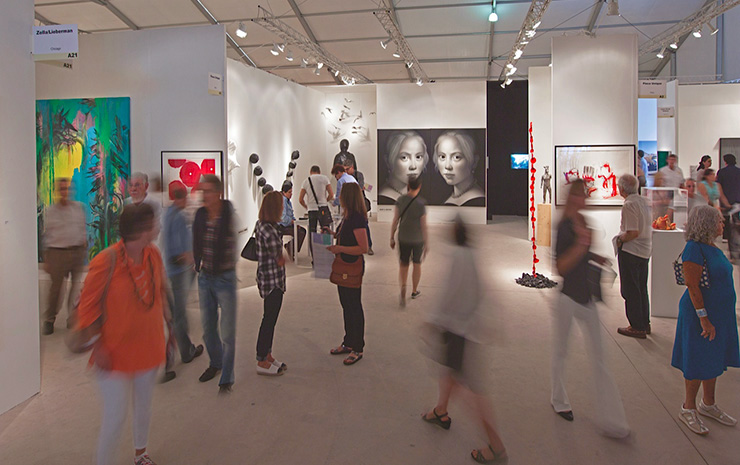 IS: How are organizers keeping it fresh and of the moment since expectations are for a fair with more street cred than the other fairs during the year?

NK: "This year we are working again with our local partners like Goldman Properties and the Wynwood Walls and gift shop to present commissioned murals from top artists to surround the VIP lounge. In addition we have partnered with Cash, Cans & Candy, a Vienna Street Art Fair and we are bringing five of their participating artists to Art Wynwood to create murals and onsite works that will inspire attendees. These artists will also be out in the community working on a special project that the community will enjoy for years to come. The artists that will participate are Stinkfish, The Stencil Network, Stephan Tompkins, Alexis Diaz and Miami locals Douglas Hoekzema & Brandon Opalka." 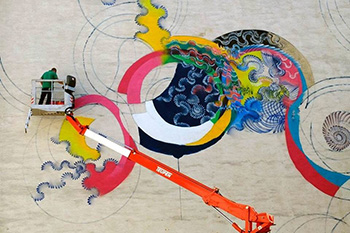 NK: "We will field nearly 70 international dealers â the biggest addition will be the increased influence of street art in the fair not just through special projects but also on exhibit by the galleries. Art Wynwood will have several works in progress that will take place during the fair from artists like Speedy Graphito presented by Fabien Castinier and C&R (Christian Volckman & Raphael Thierry) presented by Olivier Waltman Gallery as well."

IS: How is the art of the street translating to a festival?

KSD: "In a world in which urban space is dominated by global(ized) advertising slogans, art that eschews straight- forward utilization has become ever more important on an aesthetic level as an enhancement of the face of a city, but also as a junction between the public and the private. These days, Street Art is found in galleries and museums, at art fairs and auctions, and of course at the original place of the movement: the street, this interactive intersection between the artist and the public." 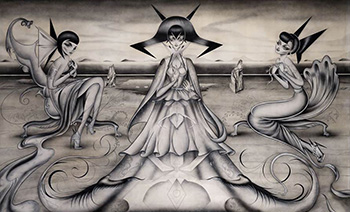 American Street Art is considered to have its origins in the Sixties of the past century. Its birthplace: Brooklyn and the Bronx, both New York City boroughs that have always been characterized by their multi-ethnic diversity.

Stencils had already been used in cave paintings, however, the central interest of Street Art was the inception of an expressive idiom which had its origin in a subcultural environment.â

â.....Street Artists have long since found their way into museums and galleriesâ and âare taking on the challenges of the white cube and breaking the established boundaries of art from withinâ taking âtheir aesthetics and expressiveness to new exciting levels by working on a multitude of surfaces; a strategy which also appeals to critics and collectors who do not associated themselves with this subculture.â 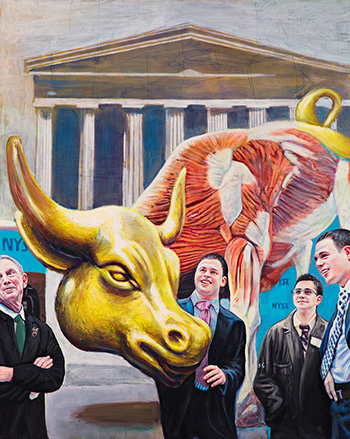 â.....Sothebyâs, Christieâs, and Phillips are offering both independent auctions for this particular art form as well as integrating it into their contemporary auctions.â âUp until now Vienna has only been emitting a weak signal on this movementâs radar. It is necessary to further the understanding and awareness for Street Art, so that it not be regarded as vandalism but recognized the art form that it is.â

âThis is the point where the exhibition Cash, Cans & Candy took up the baton by opening (in Vienna) as the presently largest Street Art exhibition ever held in a gallery space. As an intersection between art that takes place in, and is shaped by the street, while drawing attention to social injustices on the one hand, and the marketing and commercial aspects that constitute the art market on the other.â

IS: Why Candy? I get the Cash and Cans?

KSD: âItâs about the fun aspect of working in the streets, being able to directly interact with people/their audience. And a reference to the better things in life: The pink color, the trashy stencil -like writing and the slogan- like wording is meant to be understood with a wink.â 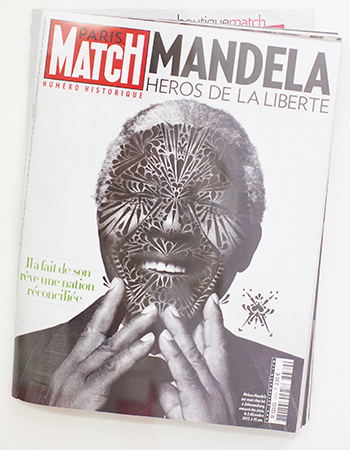 IS: What is C,C & C bringing to the party that keeps a gritty integrity to the genre?

KSD: âScene â In addition to local heroes Brandon Opalka/Hest and Douglas Hoekzema/hooxoh who know the local scene, CC&C is introducing new artists such as the Colombian artist Stinkfish who has never worked in U.S. streets before . . . who has been all the way to Kathmandu/Nepal but has never been offered the opportunity to show in the states. CC&C focuses on artists who still have a very strong connection to the street.â

Douglas Hoekzema and Brandon Opalka, two Miami locals, were part of the Vienna edition of Cash, Cans & Candy project. They will draw/paint/spray in between tents.

I spoke briefly with Miami artist, Douglas Hoekzema. Heâll be installing a spray paint and pendulum mural, using the metaphysical pendulum tool as a utensil not dissimilar to a compass drawing complicated graphics. âItâs exciting; almost like Basel has not ended.â â I am honored to be showcased by Art Wynwood and that it is embracing what is happening in Miami and Wynwood. The (Wynwood graffiti) installations is now a model for other cities. . . â

Serge Strosberg is a New York artist showing at AW for the first time. You can find him in Chelseaâs (NYC) Art Amalgamated booth (C-17). âArt Wynwood seems like a diverse and edgy art fair with some very good galleries.â â Miami is becoming the âNew York in the sunâ and we are very proud to show there.â

Strosberg explained â(His) âGold Seriesâ is an experimental body of work re-contextualizing key socio-political events that have been energizing the world, particularly since the Great Recession of 2008.â This series âdeals with events that actually happened on the streets of New York, Los Angeles, etc...â 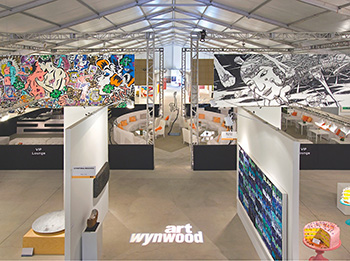 â.....the Wall Street bull is re-imagined as having a skin of Gold, instead of Bronze like the original, and stripped to the bone. Bloomberg is looking away as any politician and successful businessman tend to do, when their protÃ©gÃ©s are pillaging and stripping a metaphorical carcass of its skin. The dissected bull is also a hidden criticism of the speculation going on in the art world with Damien Hirstâs dissected cows in formaldehyde, as well as many other branded artists, being traded like any other global commodity.â

âAs an artist I was moved, even mobilized, by the seemingly short-lived OWS (Occupy Wall Street) movements. And at the same time puzzled and deflated by the way these movements were crushed by the powers that be and the general inertia of the unsatisfied masses.â

Itâs impossible to write about Wynwood and itâs success without a nod to the Tony Goldman family. Goldman was the mastermind in bringing good food to the mean streets, and kicked it out of the park with the addition of peppering Wynwood Walls with the writings and drawings of graffiti royalty throughout the world beginning during Art Basel 2009. Sadly, he passed in September 2012, but not before writing his own legacy by creating wildly innovative scenes, resurrecting many blighted urban neighborhoods from Miami Beach to New York City and beyond. Goldman Properties will sponsor several 2014 Art Wynwood installations under the aegis of CEO Jessica Goldman, as well as commissioning three murals for the VIP Lounge by top street artists.