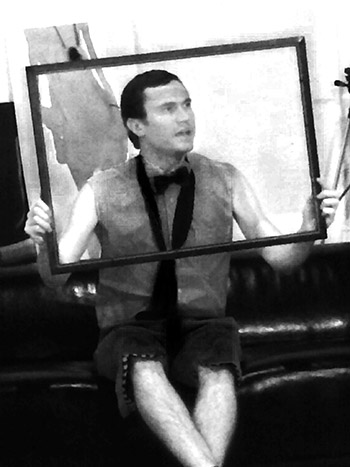 In a true intersection of art-meets-art-meets theater, Thinking Cap Theaterâs Pool (No Water) is an abstract play, and, when done wonderfully, itâs like watching a work of theater art being created before your very eyes. Thatâs most likely the point, but itâs also a difficult feat to achieve.

Artistic Director Nicole Stodardâs production doesnât only grow in the space of its 55 minutes, but surpasses what writer Mark Ravenhill probably envisioned when he arrived at his oddball dramatic structure. Stodard explains in the directorâs notes that Pool is "written as a monologue intended to be divided up. The script contains no specified characters and every director who takes on the piece must determine the cast size and line assignments."

The 2006 premiere production had a cast of four, other productions have had casts of up to 15, TCTâs ensemble is seven. Actors in TCTâs production never leave the stage (there is no place for them to go in the space) and each share in a wonderful volley of dialogue. Stodard has assigned (or perhaps the actors were able to come up with their own backstories) a persona to each unnamed character. All artists, they each have a medium â video, painting, fashion design, you get the gist. Part of the group are rabble rousers, the others have more of a conscious. 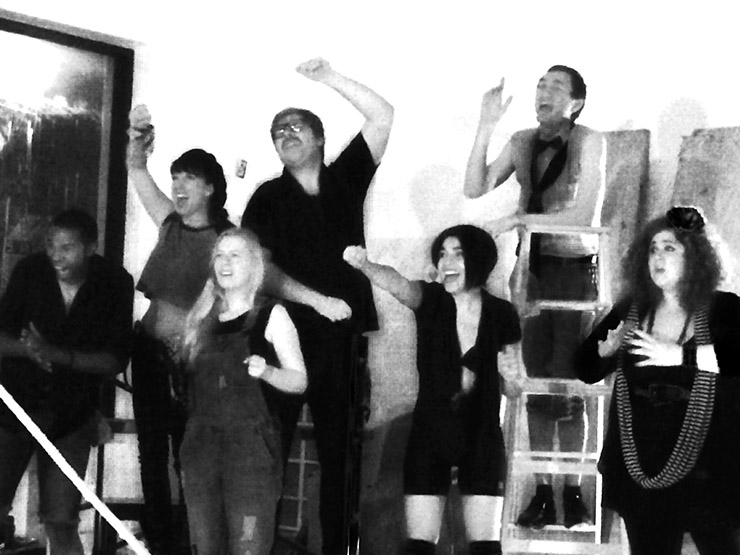 As the play progresses, they vascillate from one extreme to the next, making a commentary on jealousy, envy, life, death, success, lack of success, social climbing, escapism, self loathing, and whatever else one can read between Ravenhillâs lines. Seven artists most of the time break the fourth wall to tell the audience its collective version (with sometimes opposing viewpoints) of how this "group" embarked on a journey to visit a fellow artist, formerly of the group, who now owns an expanse complete with backyard pool on the West Coast. They are only a wee pit peeved that sheâs made her fame from another one of their "group" who died of AIDS.

"She used Rayâs blood and bandages and catheter and condoms. Pieces that sold to every major collector in the world." When their friend has an unfortunate accident, they begin to contemplate nabbing celebrity of their own, by using her situation as subject matter. Itâs an interesting commentary on karma, payback, and how tides can turn. 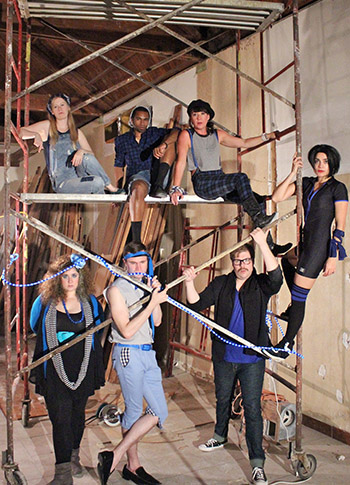 Stodardâs imprint is all over the piece and itâs vibrantly wonderful to participate in the vision. She uses an artist space at Fort Lauderdaleâs Muse Center for the ARTs, where the smell of oil paint wafts through the air, giving the environment an authenticity as a backdrop. Not a theater space by any means, her production team has rigged lights and music to wonderful effect.

Her ensemble is connected at its core, which is so crucial to the success of how the piece is constructed. Miles Alexander, Hannah Citrin, Casey Dressler, Niki Fridh, Noah Levine, Desiree Mora, and Scott Douglas Wilson, melt into one another, never dropping a beat. Itâs thrilling to watch their tossing of lines to each other , almost like a game of hot potato with dialogue. A true ensemble, there are no standouts in this production (all are equally compelling), as each actor understands the nature of the piece.

Yes, you do need to put your thinking cap on to be an active participant in the adventurous Pool (No Water). But go ahead, dive in, the water is more than fine. Itâs absolutely refreshing.